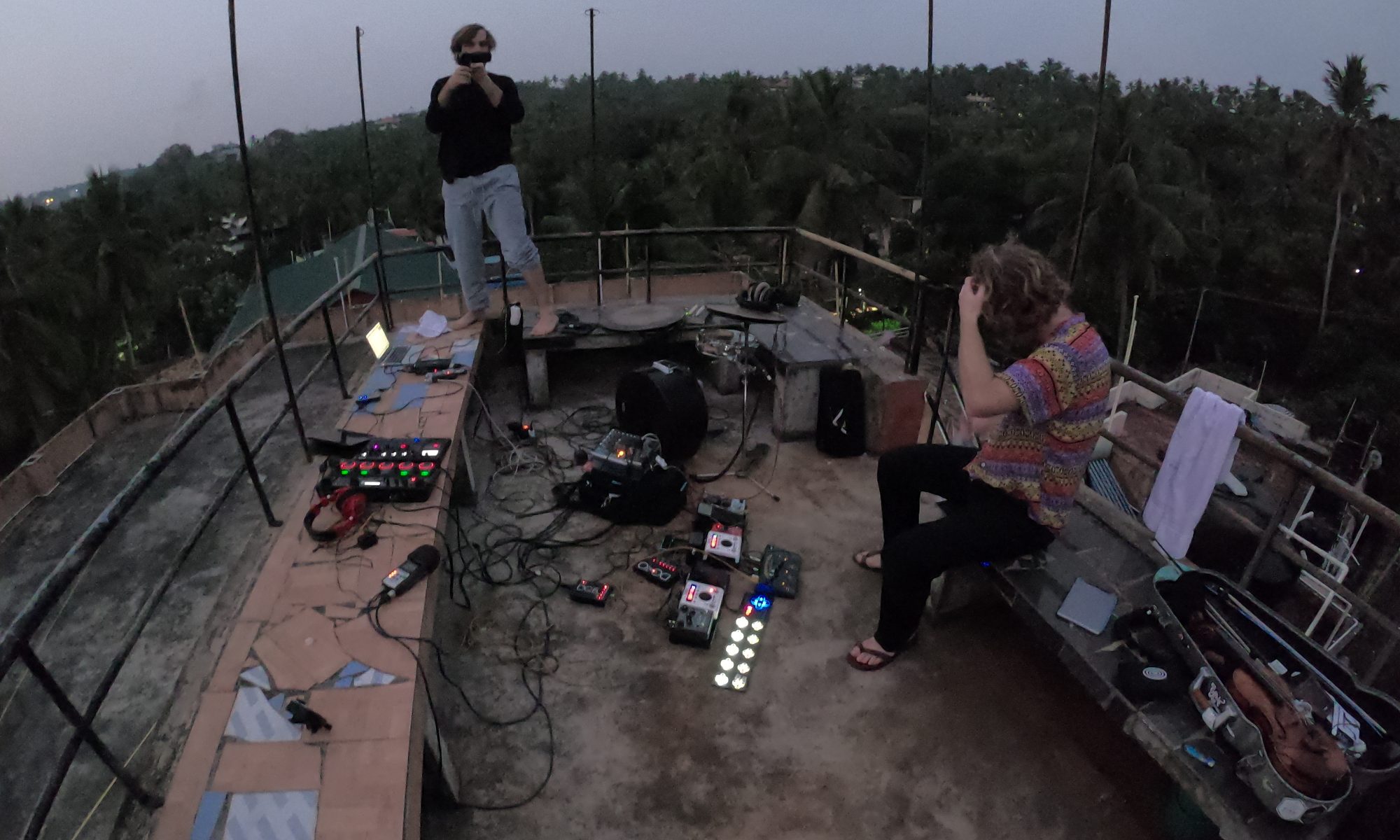 The first alarm sounded at eight but somehow the day started at eleven.

Down at the beach we had fruit salad and fresh coconut und took the Gopro for a swim, bodysurfing the waves. Immo got washed around while trying not to loose the camera and landed straight on his head and right shoulder, ouch. 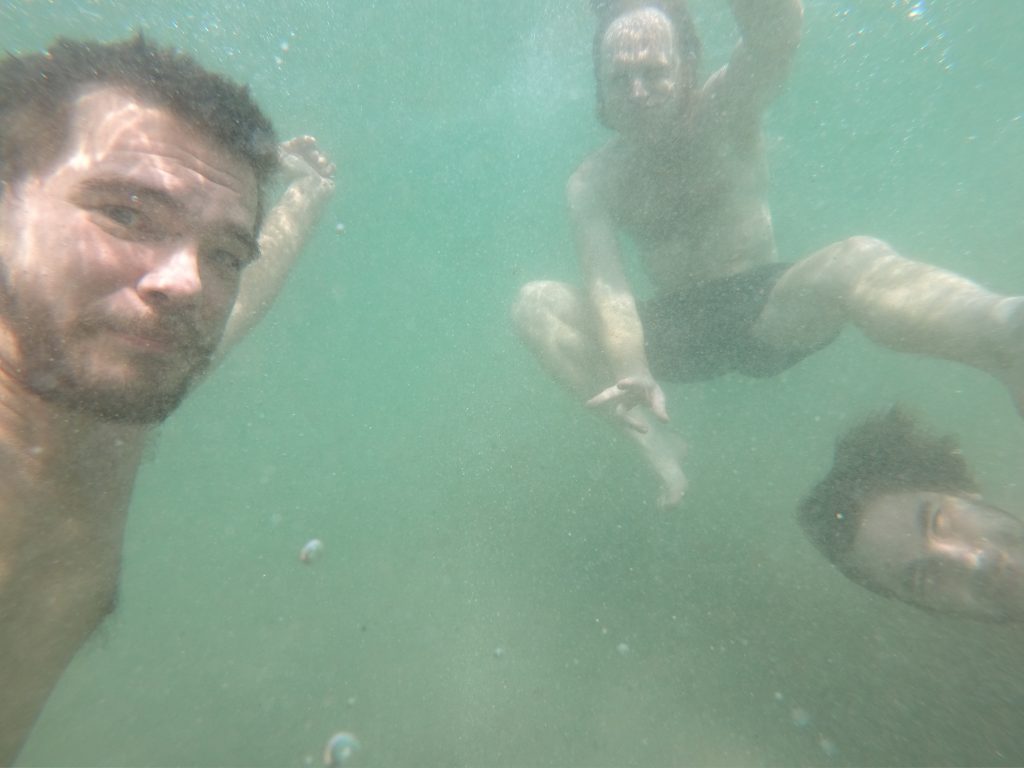 After not buying the beach towel, the wooden box or the cigarettes, which we were offered kindly while sitting on the beach, we needed to get out of the sun and ended up at a vegetarian restaurant to have a fresh juice. The waiter came back and told us, that the electricity was off, so no fresh juice. We switched to lime soda and plain rice, Dal, Chili Gobi, Lemon Rice and butter papadam instead. 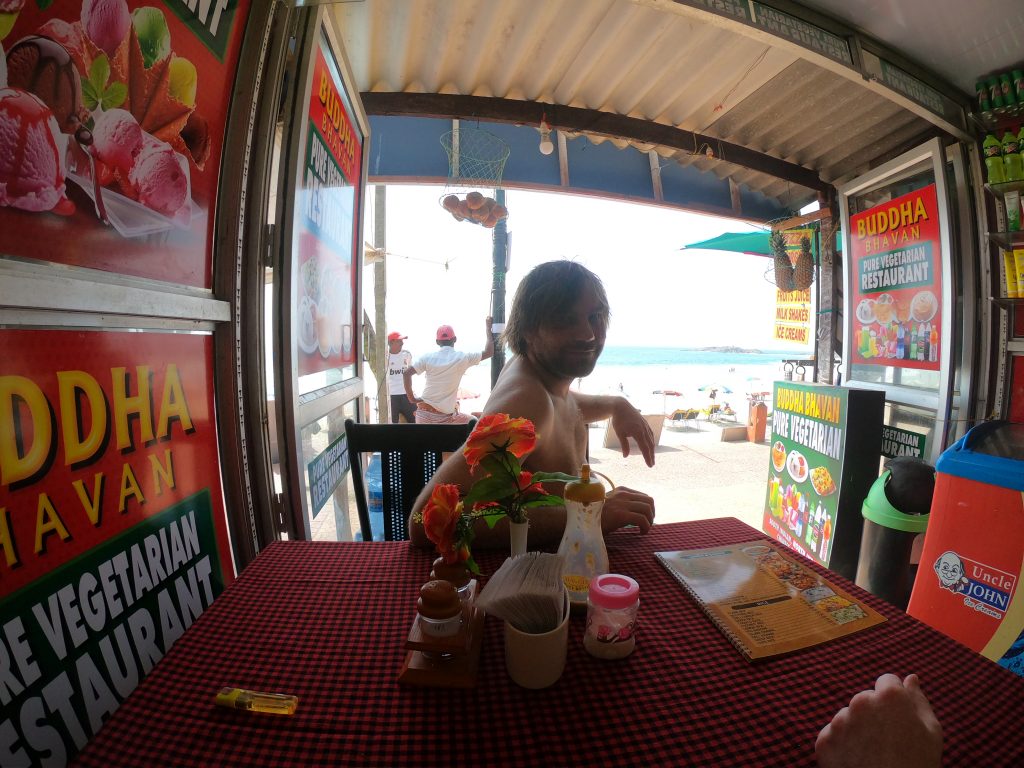 Upon heading back to the hotel we explored the upper floors and the roof for our planned recording session. From the roof there is a great 360 degree view over all of Kovalam which is pretty much covered by green palm trees. But: no electricity so we have to wait for it to come back on. 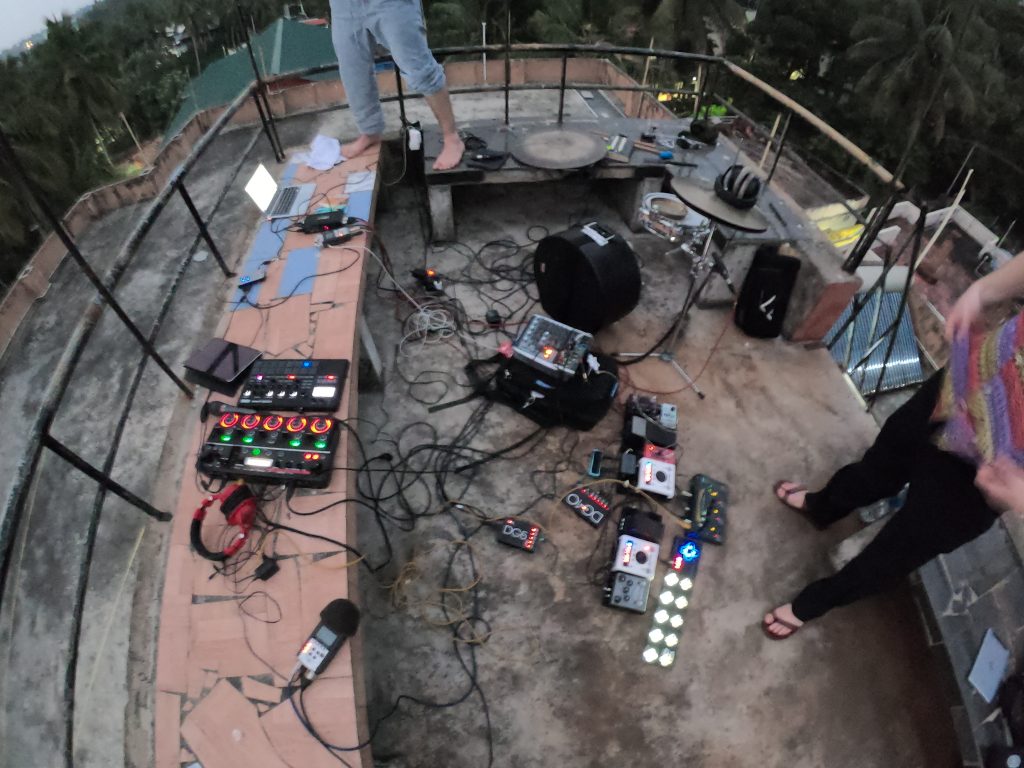 Our modular setup is tricky, different components from different companies, lots of cables and signals and sampling rates… plus the cameras! 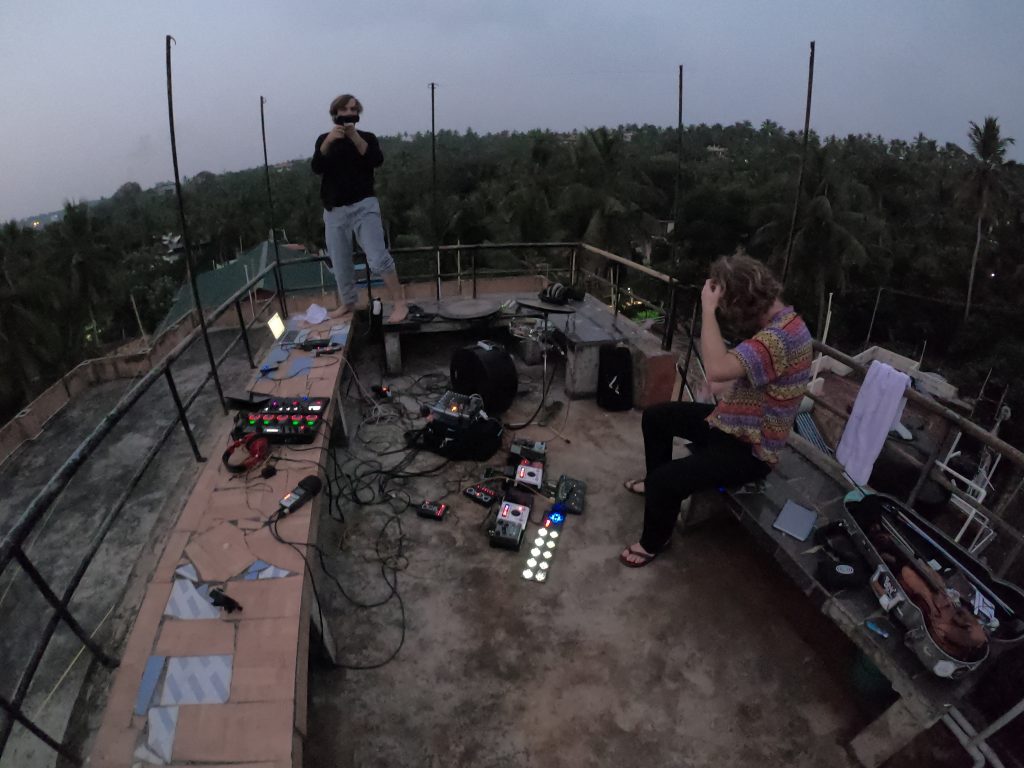 The Sun was sinking quickly and our setup was still not right. We still did some Soundcheck Sessions to know what we had to fix afterwards. It turned pitch-black within a matter of minutes and we moved everything to Immo’s room to fix the setup for tomorrow. 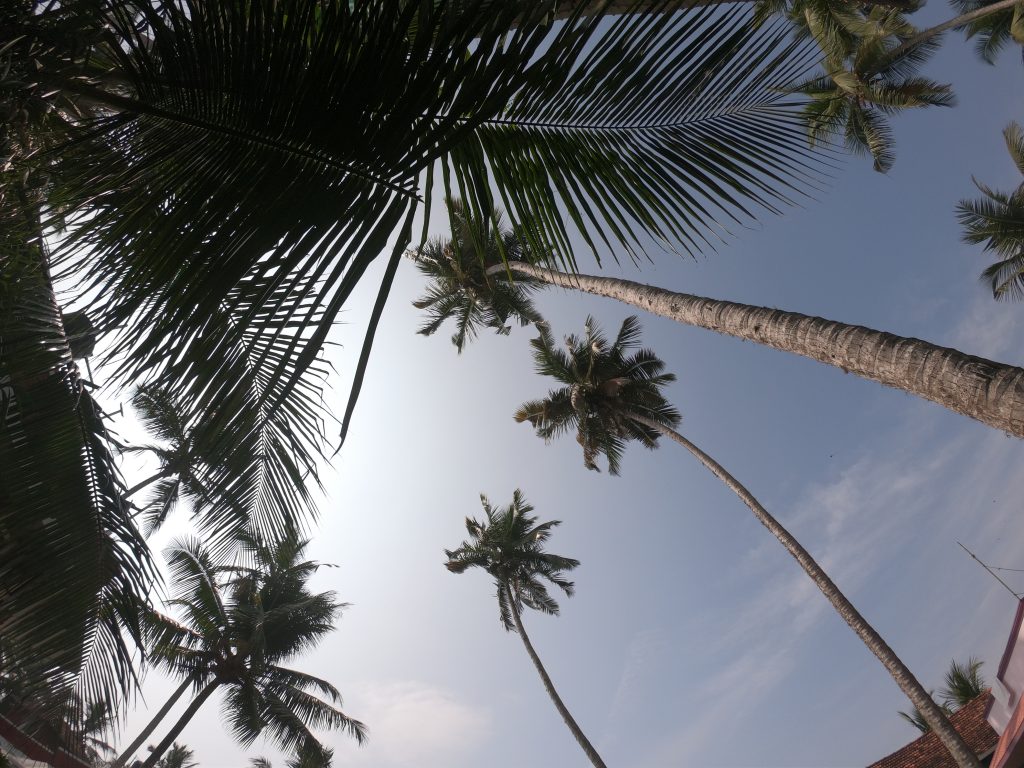 That took a little while, but the results seemed to be a better situation for tomorrow.

Gigabytes were transferred before we headed down to the beach for dinner, this time at Malabar, our host Charles had recommended the style Kadai, be it veggie lord with fish or seafood. We had a very funny waiter, the Beer was once again served in Tea Cups and named Pop Juice on the bill. 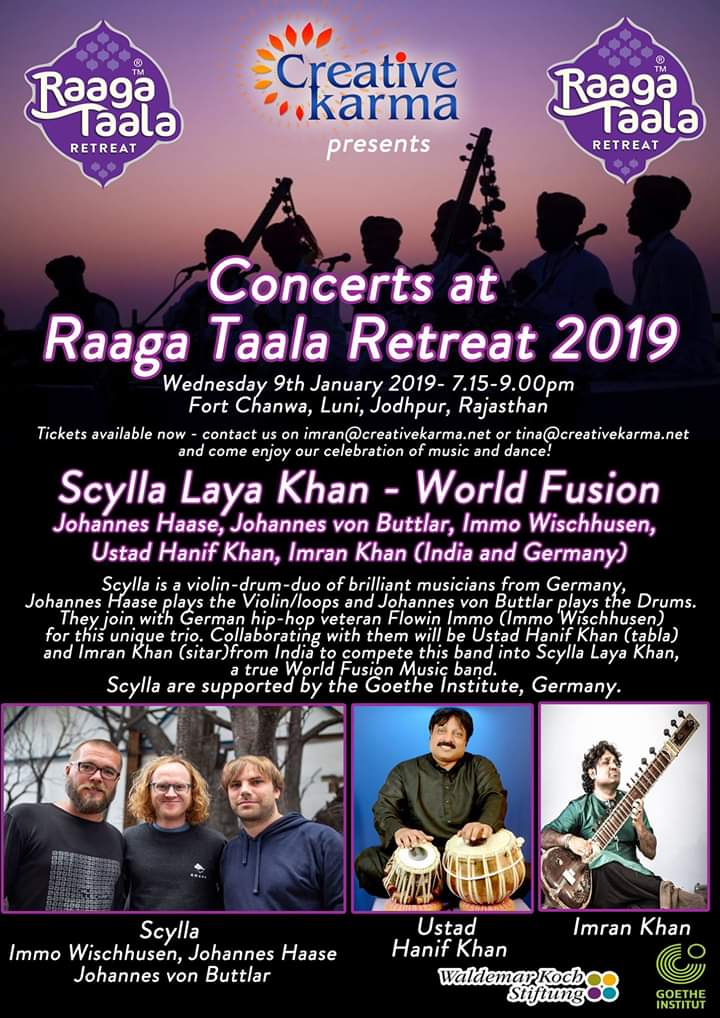 After a good nights sleep we tried to get breakfast although most of the participants were gone, as we missed the chance to get up at 5 in the morning to witness a concert at sunrise and morning yoga at a local palace. We ended up getting omelette and sandwiches and chai masala.

We wanted to find out where exactly we had been the last two days, as we had not really left the Fort yet, so we went for A walk around the town of Luni, which is actually called Chanwa, as we would later find out. 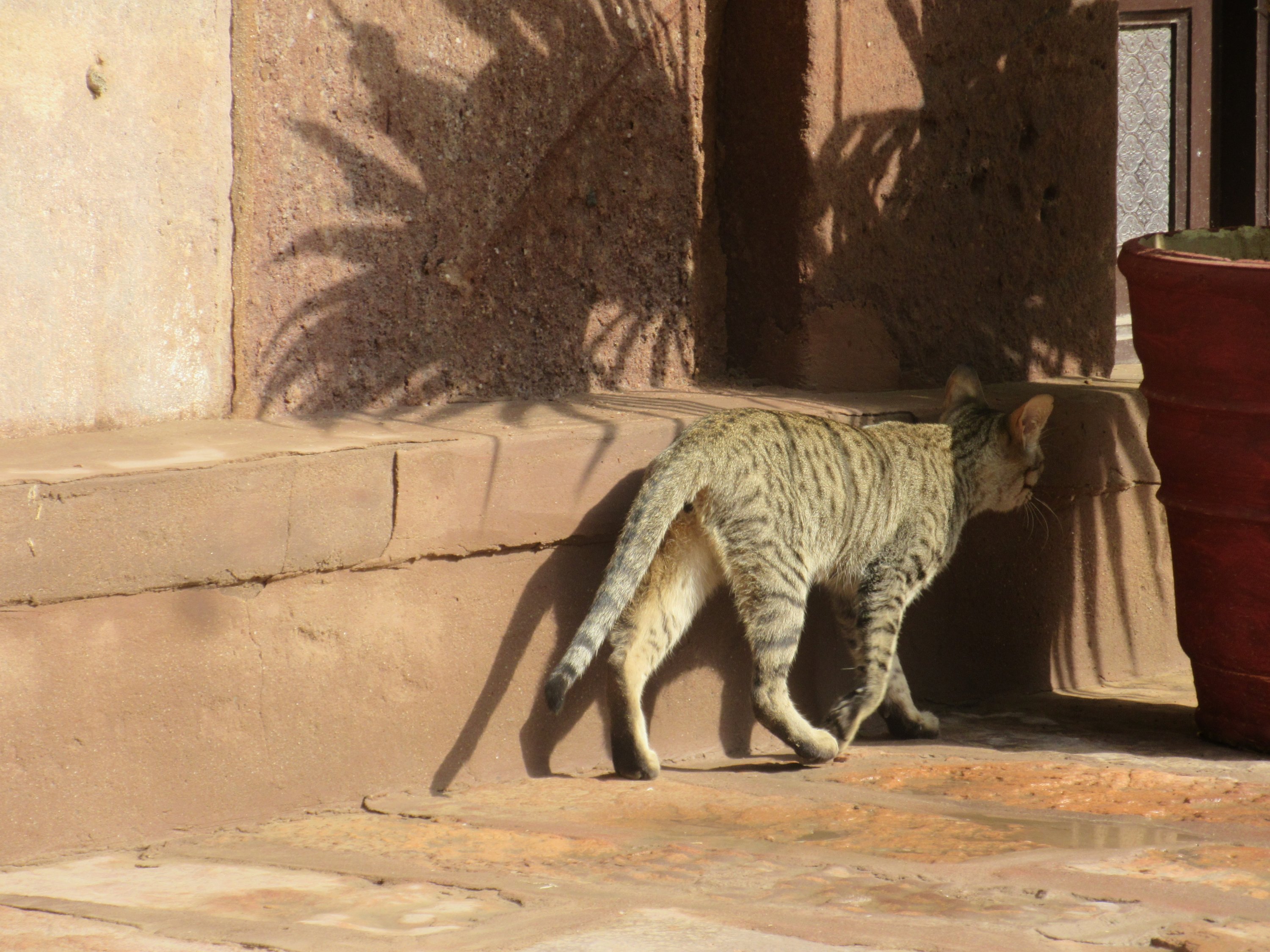 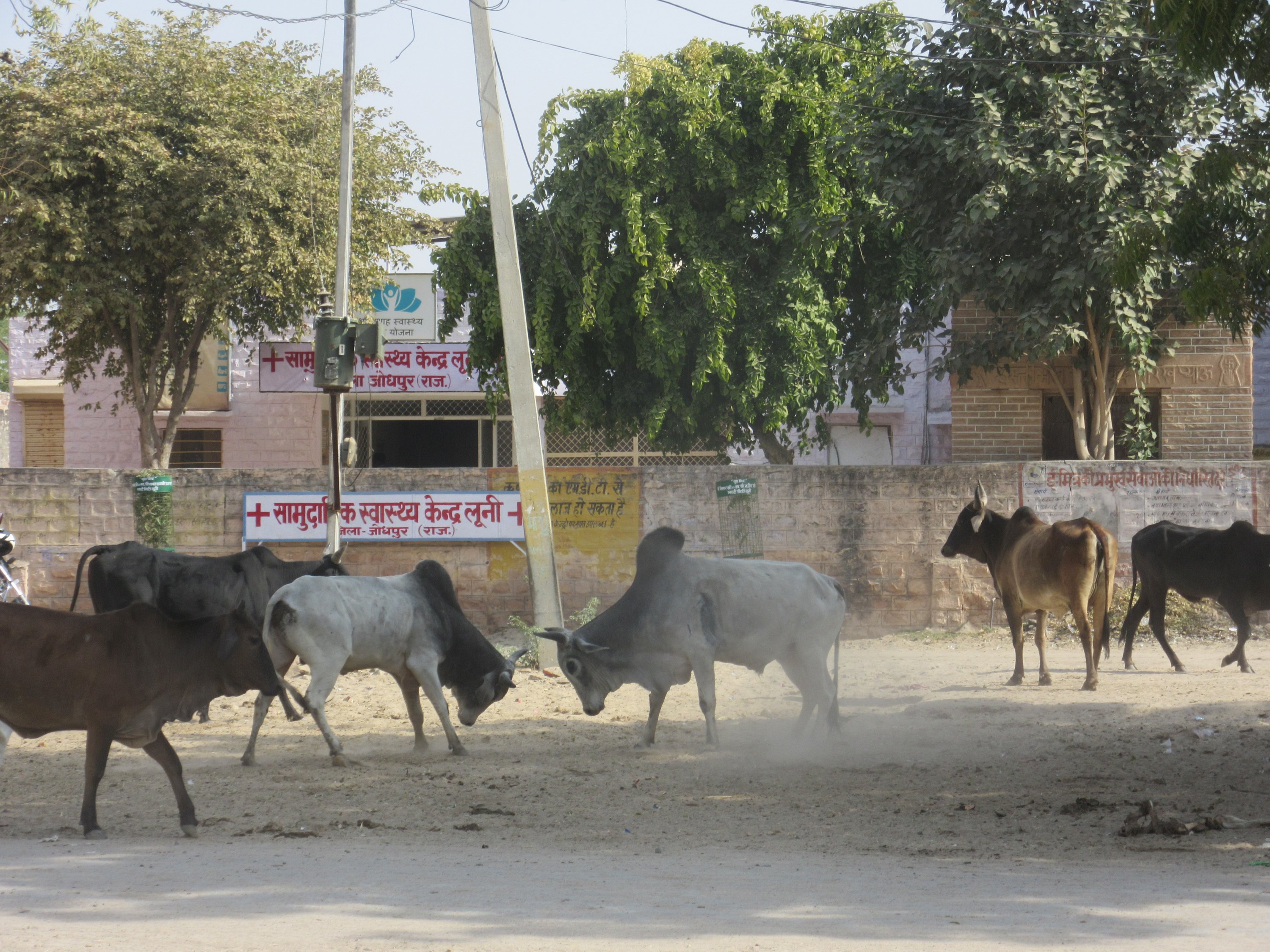 A lot of cows just roam the streets and chew up whatever they can find, which often is the trash laying around. Two bulls were dueling withers their horns, but we left after the first round of the fight. 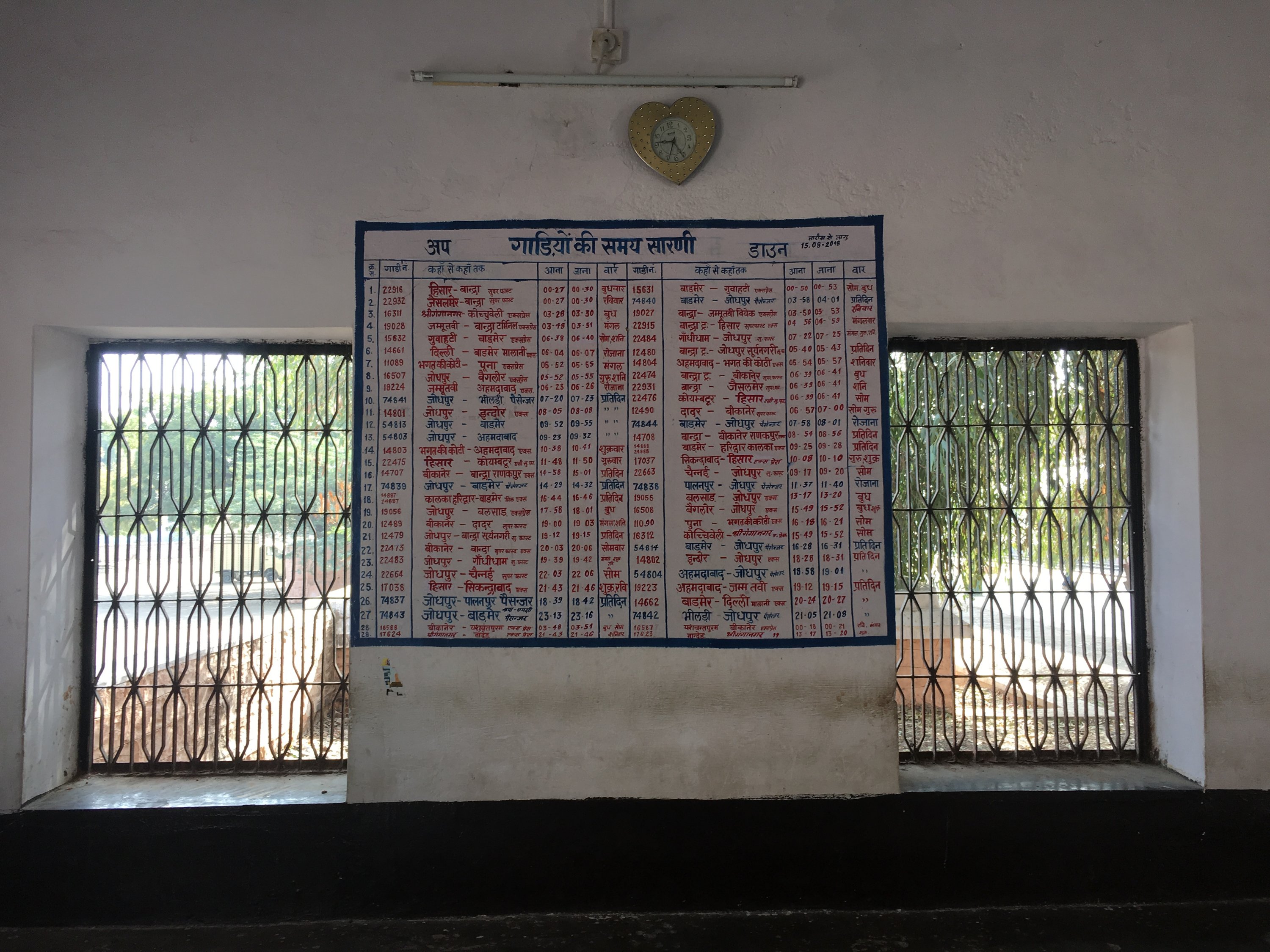 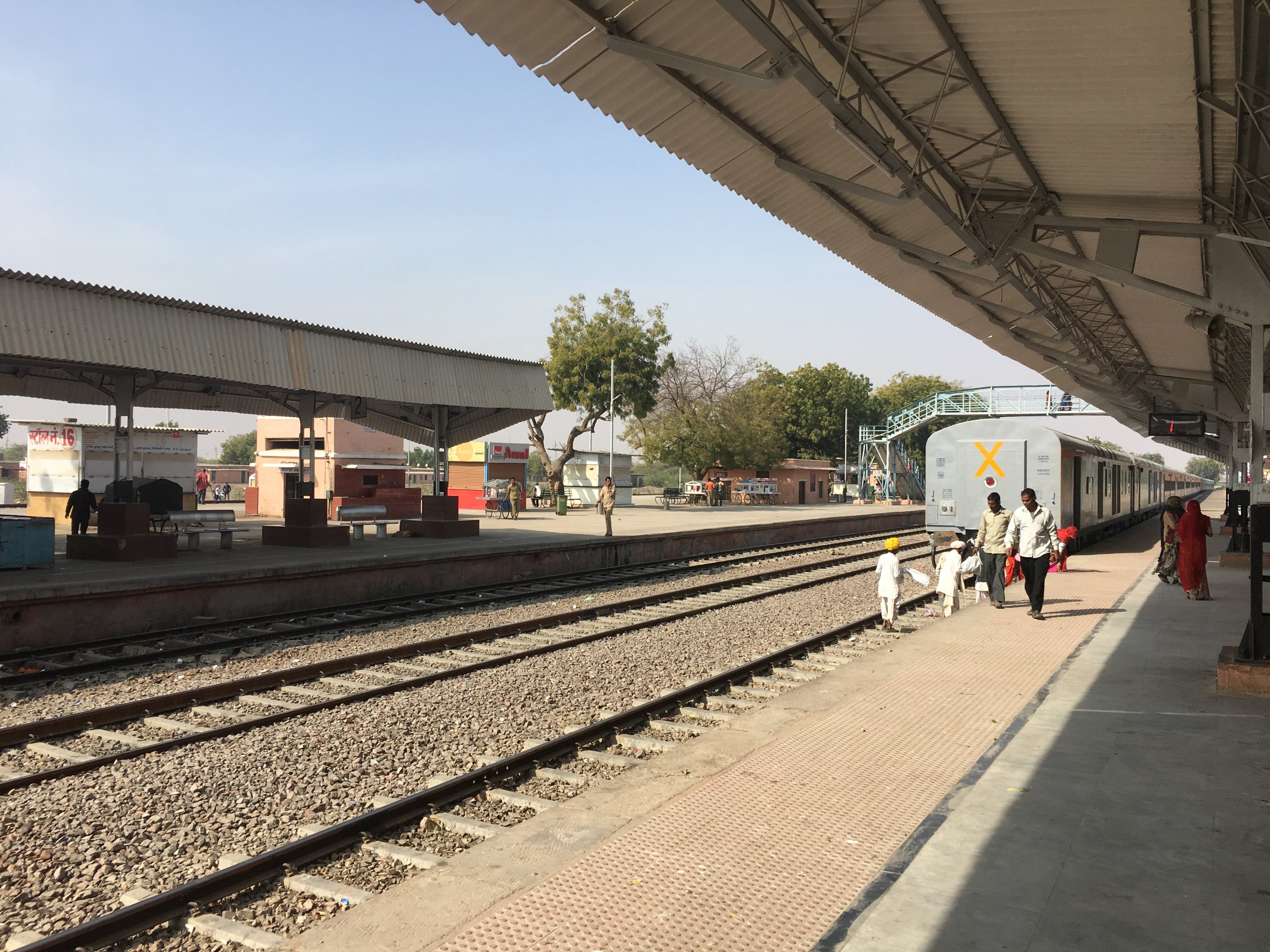 Chanwa is a village with some shops on the main street and the residents were doing their thing as we passed by. At night we could frequently hear the trains honking so we wanted to find the railway. Welcome to Luni station. Not much else to see here, so we grabbed three espresso size chai for 20 rupees, which is 0,25€.

We arrived back at the Fort and Imran was already looking for us to start our second rehearsal.
Last night we had already setup in the Poolroom next to the swimming pool and practiced some of the pieces from last years concerts in Leipzig and Bremen, but more work needed to be put in.
Johannes brought a special type of drum set with him, a snare drum case is used as a bass drum and a small snare is attached right to the high at stand. Genius!

We ended our rehearsal at 15h with eight pieces on our set list and moved the equipment to the stage. 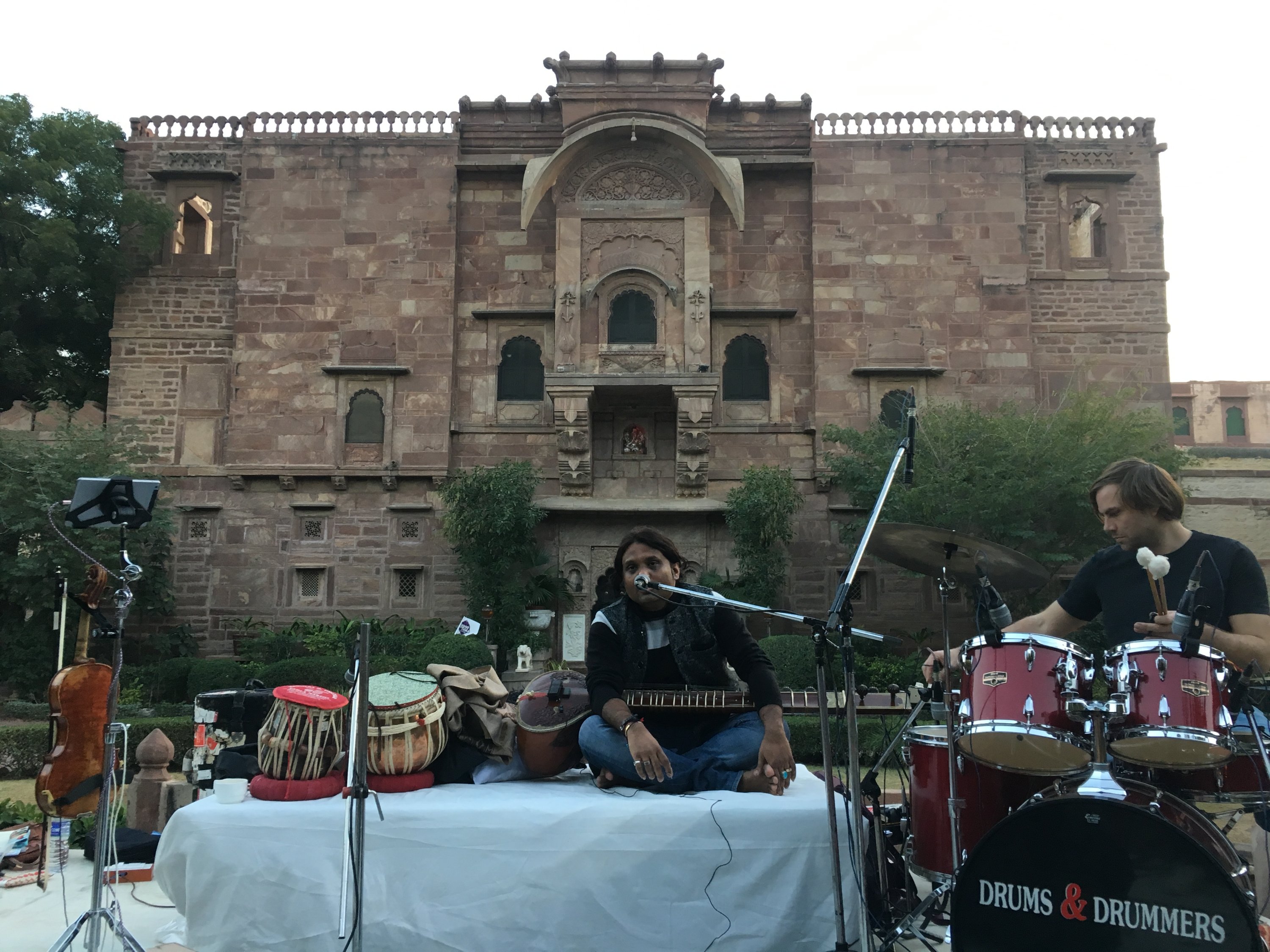 A real drumset was brought in and while we installed ourselves on stage the tech crew set up the PA system and mics. 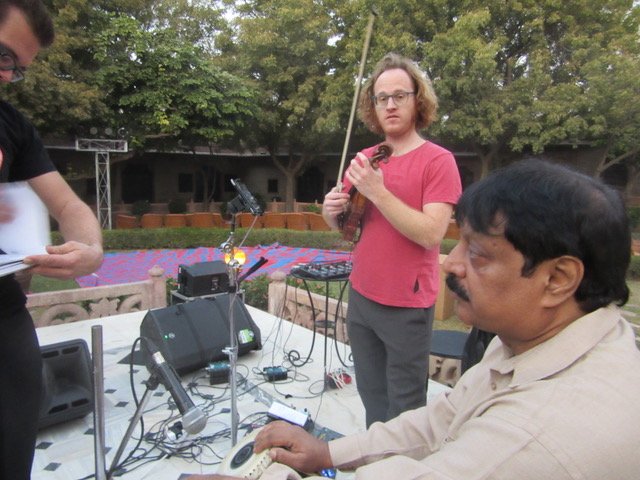 Hanif Khan arrived with his Tablas and we were complete. During soundcheck a few pieces were repeated because Hanif couldn’t be at the two previous rehearsals and the recording setup also had to be installed and checked.

At 19h we were done with all preparation including our cameras, it was dark already and the concert started at about 19:45.

Here is a short livestream clip of Dance in the dunes with a Freestyle verse from Flowin Immo:

The five of us had fun together, the crowd was energetic in their feedback, so after about two hours they were asking for an encore: Confusion!
Or Khanfusion?

Khanfusion starts at about 24 minutes:

After the show we took everything apart and brought it to our room, when Imran introduced us to the Prince of the Fort. Nice Guy.
To start the after show celebration with a few Kingfisher Premium beers (to be sold in Radjastan only) we went to the bar which is only in service in the evening hours and the very friendly and funny Barkeeper.
We joined a group from England, Switzerland and Germany that we met the night before, sitting around a bowl of fire, and they were still reciting the lyrics of the confusion encore jam.
The Prince also joined us and he told us about the history of the fort and his family as well as the origin of the name Luni. It stems from Lun, local name for salt, because from the nearby desert a river emerges out of nowhere which also disappears into nowhere and its water is salty!
The railway station used to be an important junction on the route from Mumbai to Karachi.
He told us that the Fort was built by a Maharadja from the caste of the Bards, so it seems to make sense to perform music there.
He stated that he does not believe in afterlife and your one chance to be happy is in this reality.
He also generously invited us to drink what he was drinking: Rum with water. That ritual was repeated a few times so now the memories start to blurr… 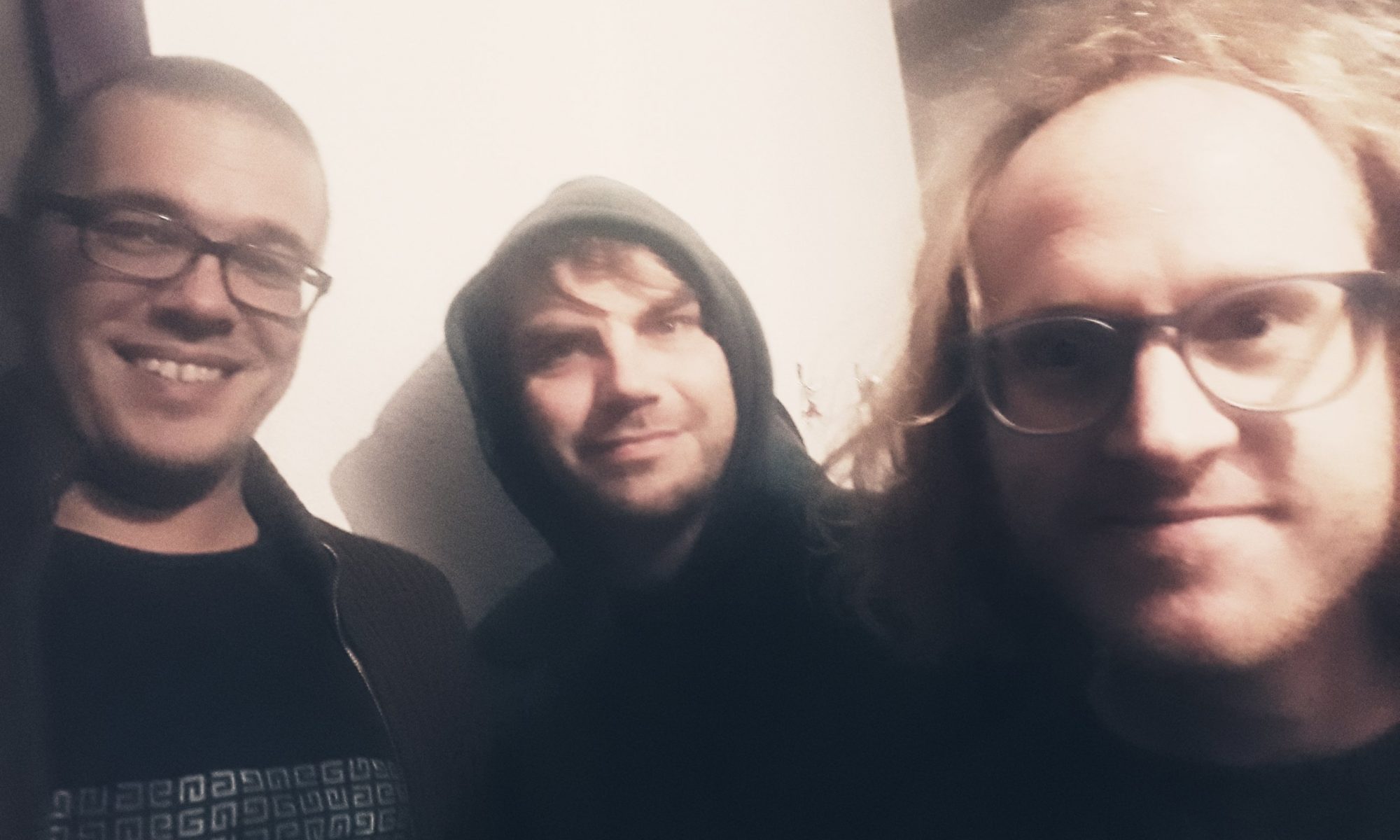 As our Record release Party is happening on November 16th we are preparing for it! 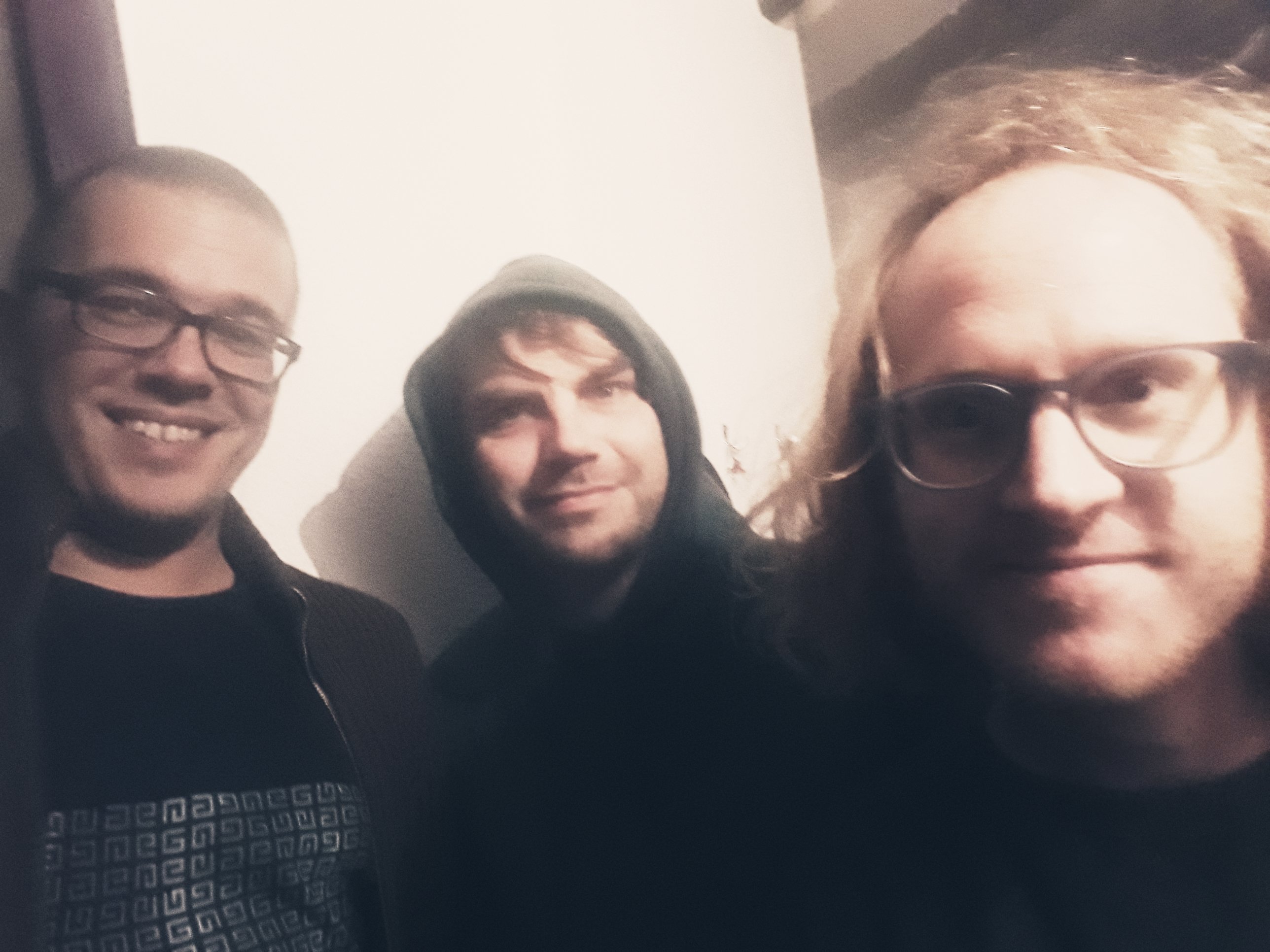 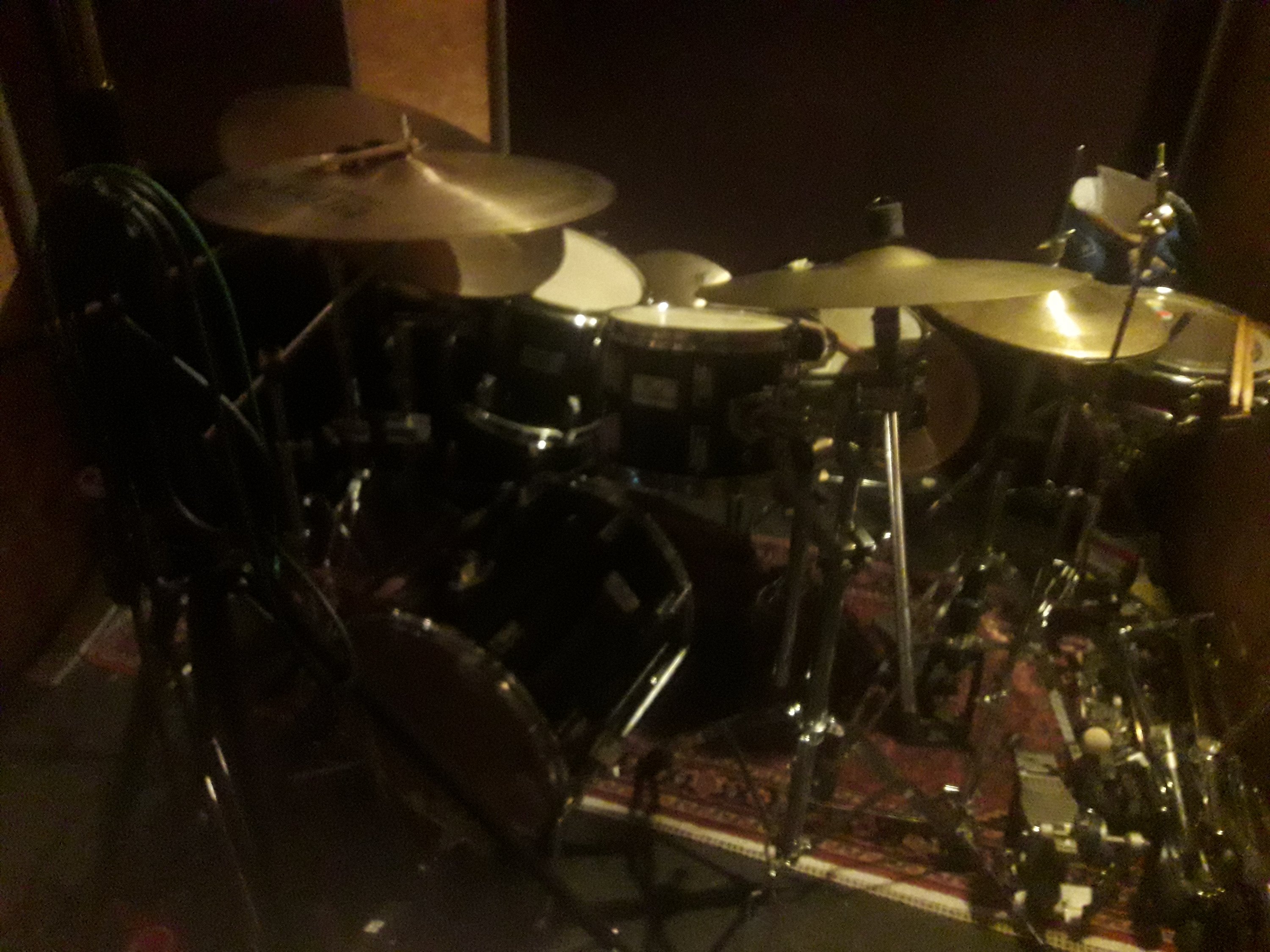 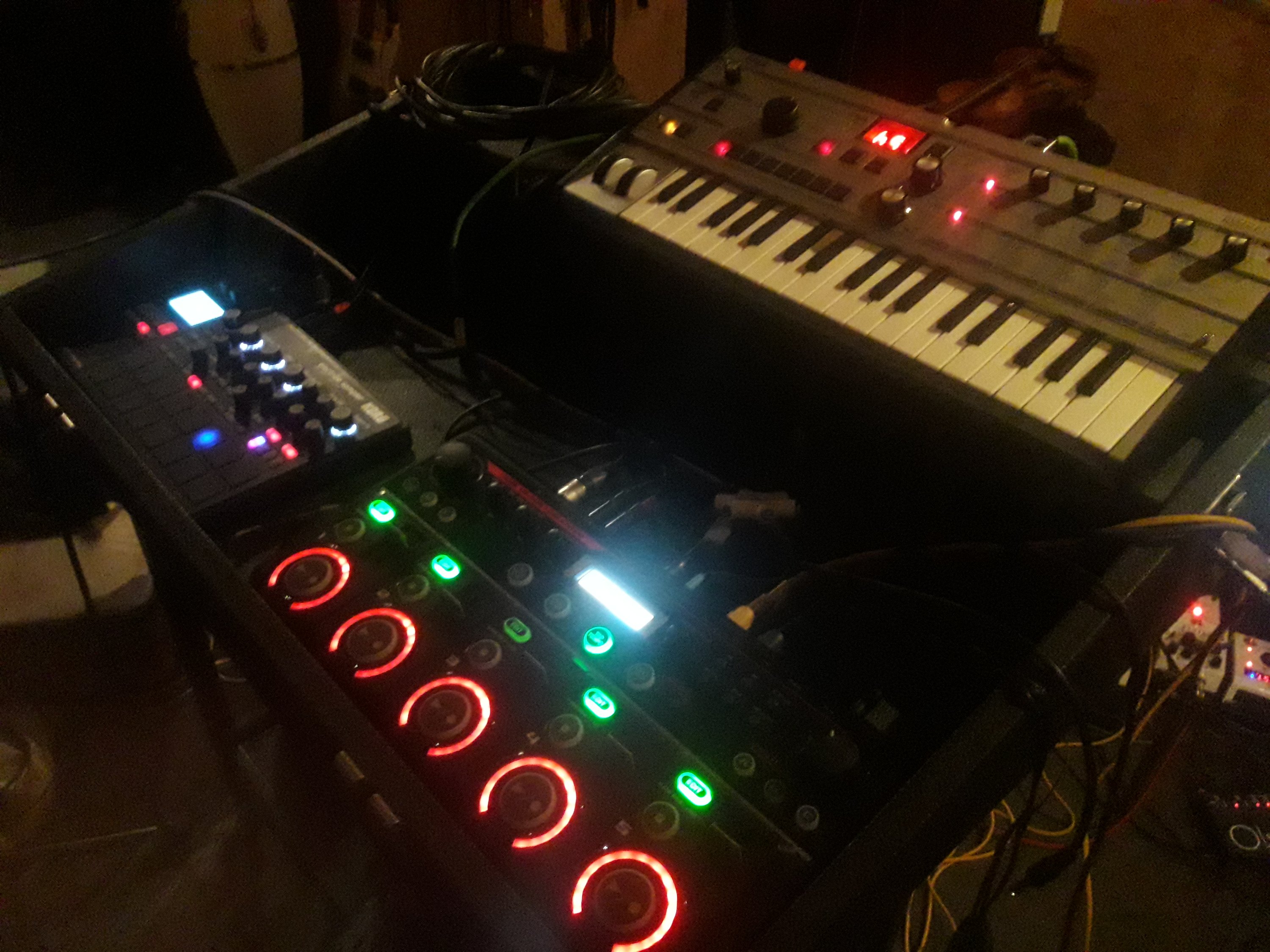 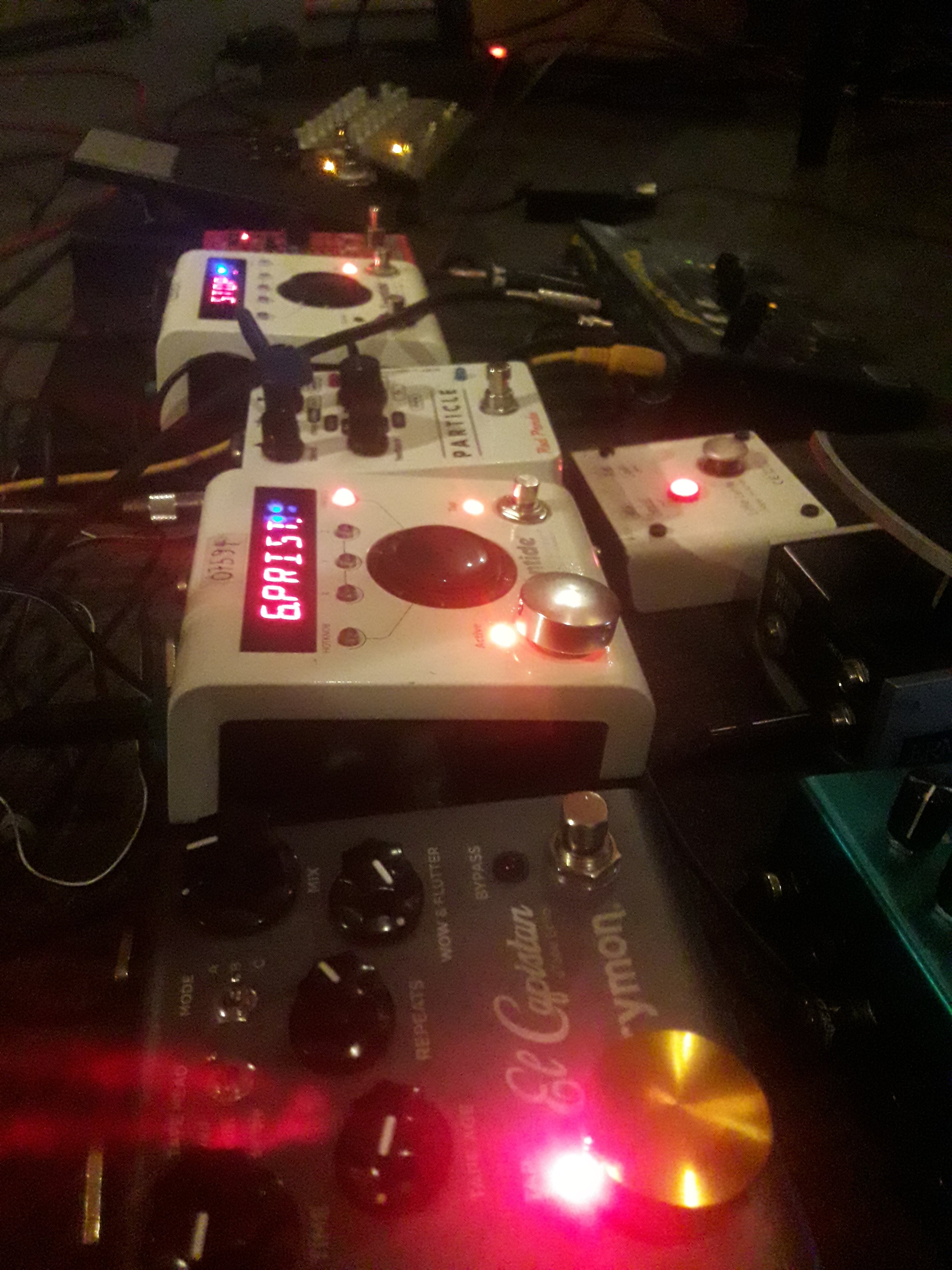 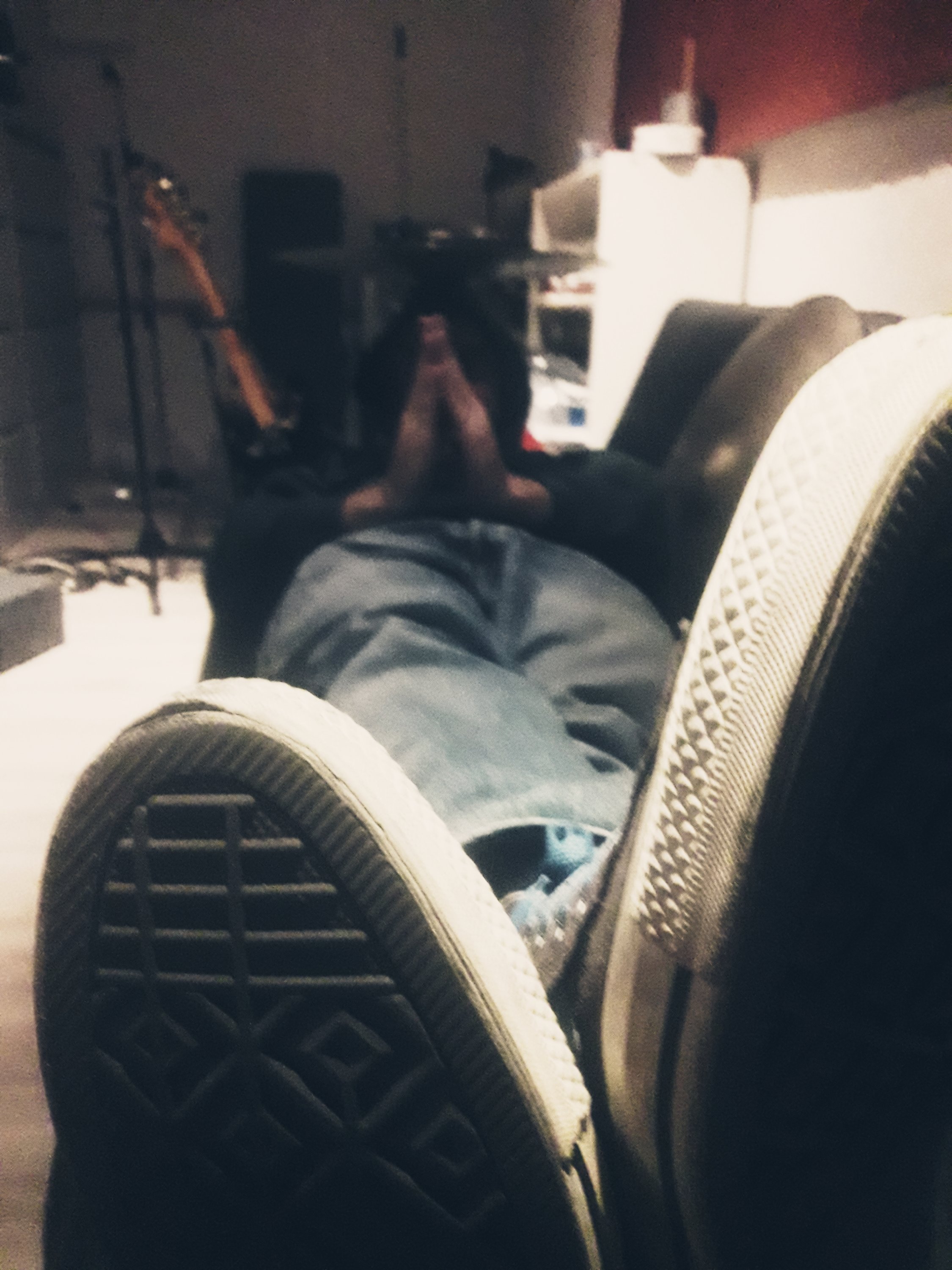