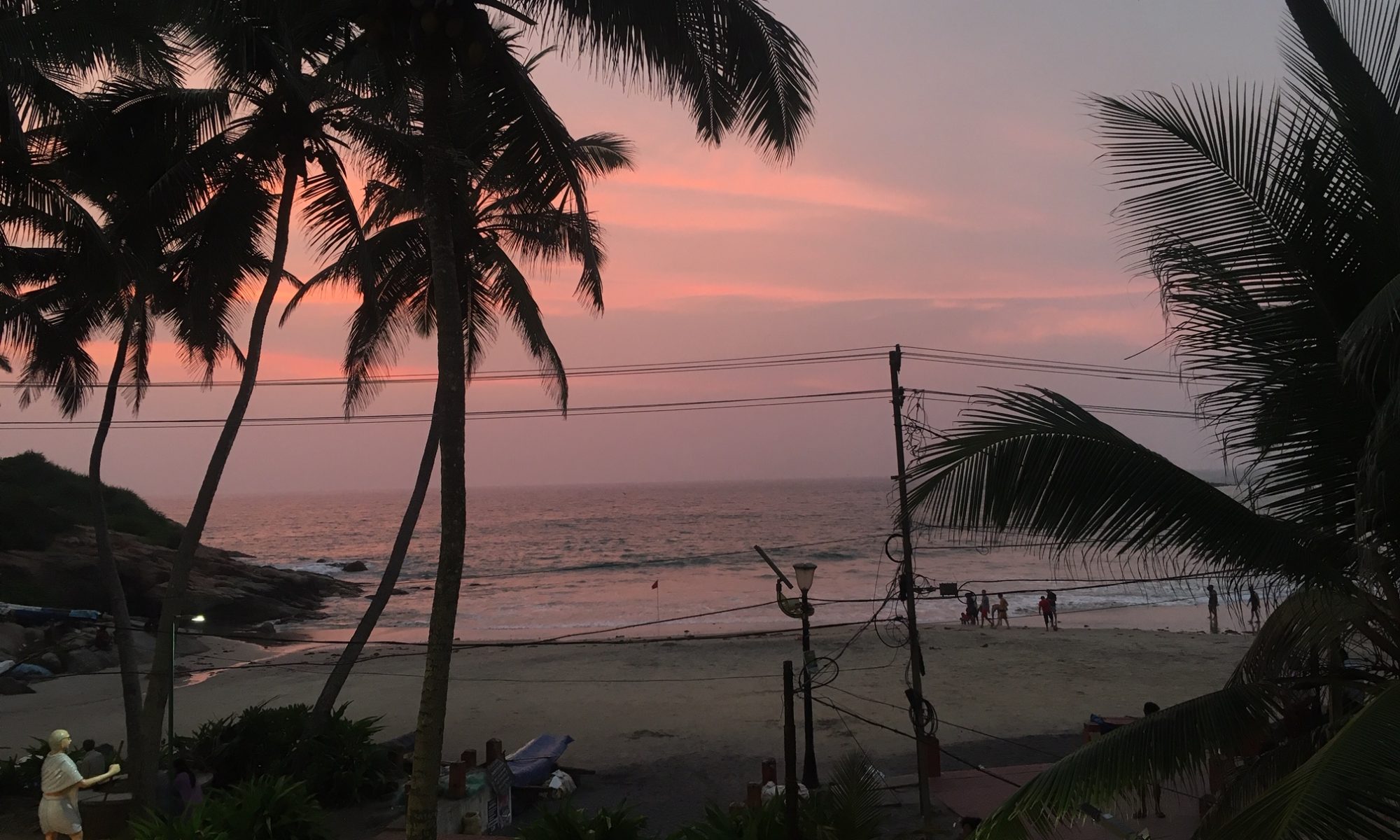 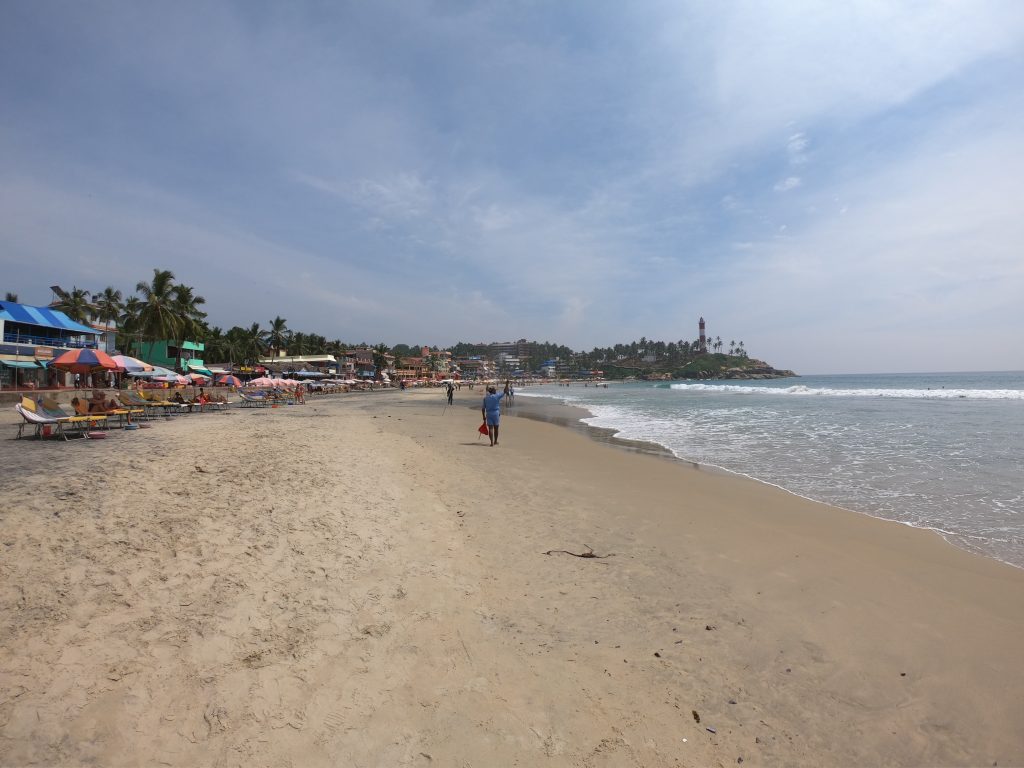 We jumped into the water and had no further questions. 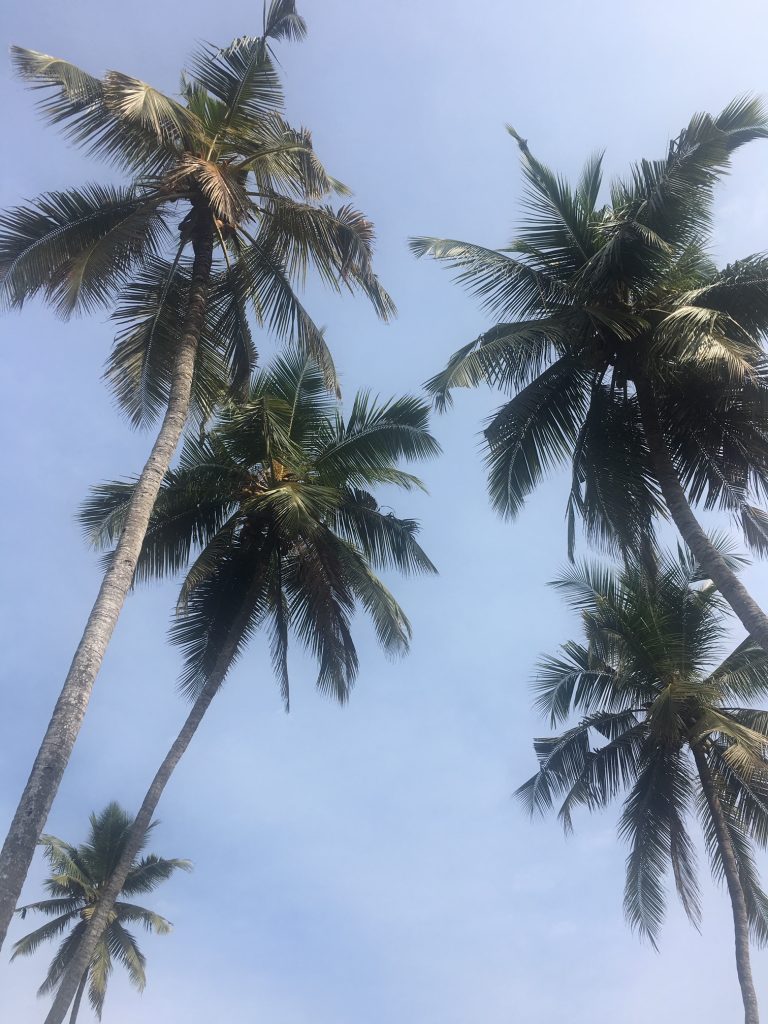 We had lunch at Ocean Breeze Restaurant, trying to realize where we had landed. 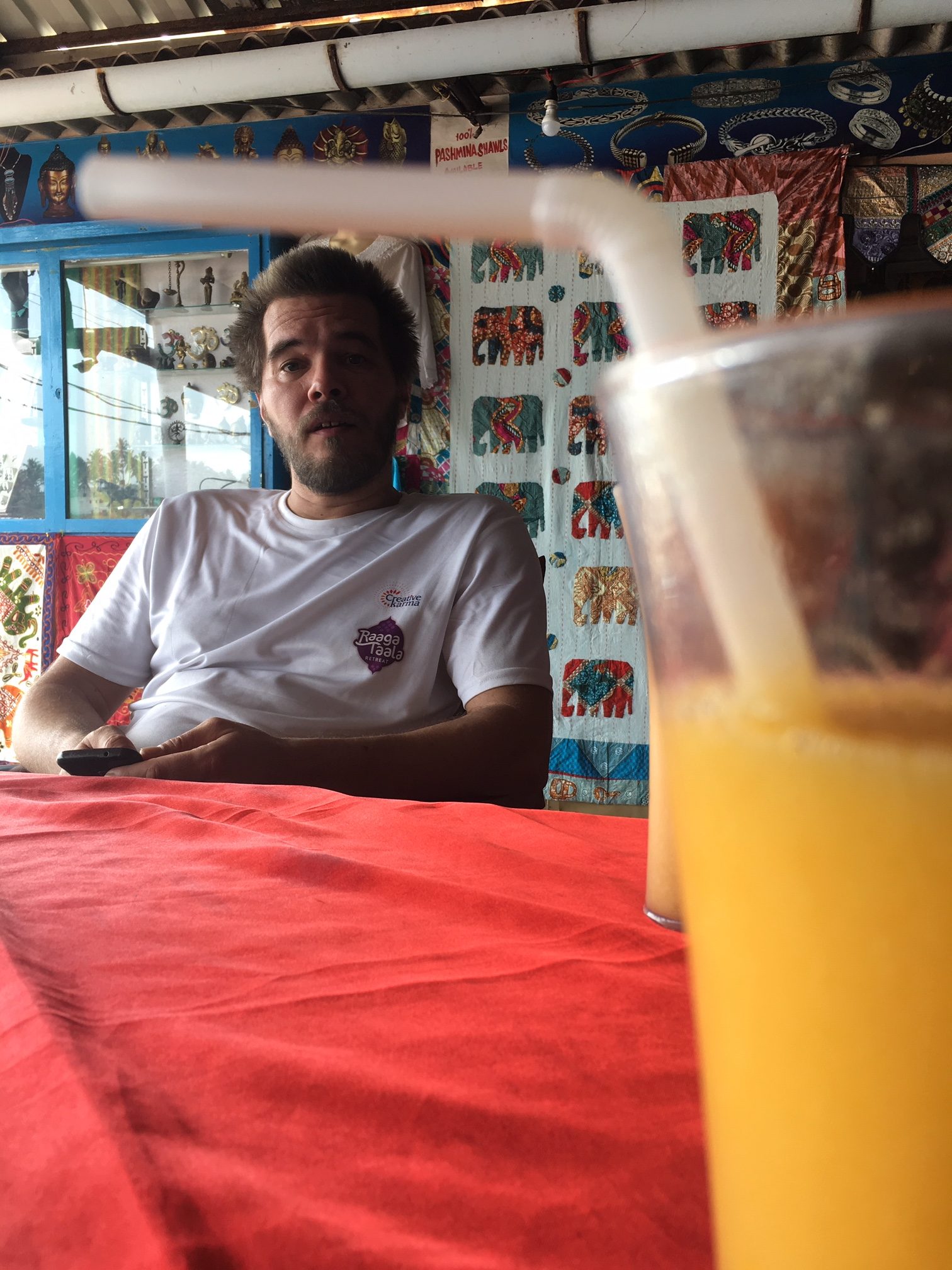 In the evening we went down to the beach to enjoy the sunset and have a few drinks. Charles had told us, that only a few bars have a license to sell alcohol, so the ones that don’t have one sell it too but at a higher price because of the risk of getting caught. 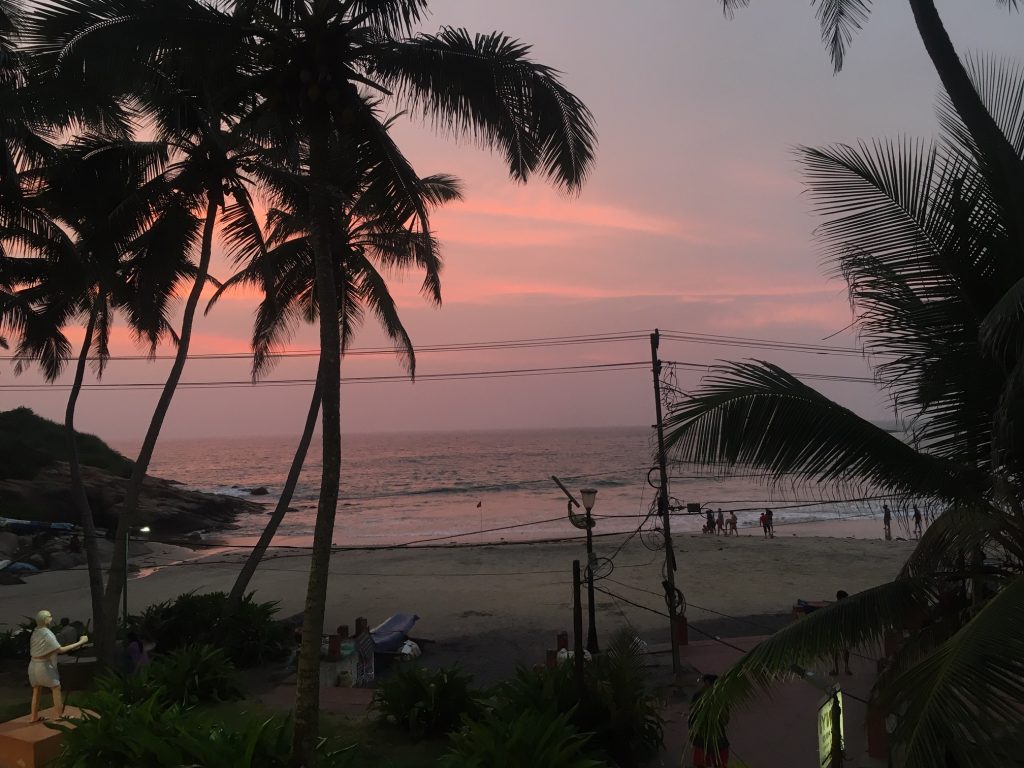 We sat down at Fusion, a good-looking bar, overlooking the beach from the first floor Terrasse, the Kingfisher was cold, the orange juice looked tasty, so we went for a Cocktail called Sundowner, which was served in a fresh coconut. Nice! 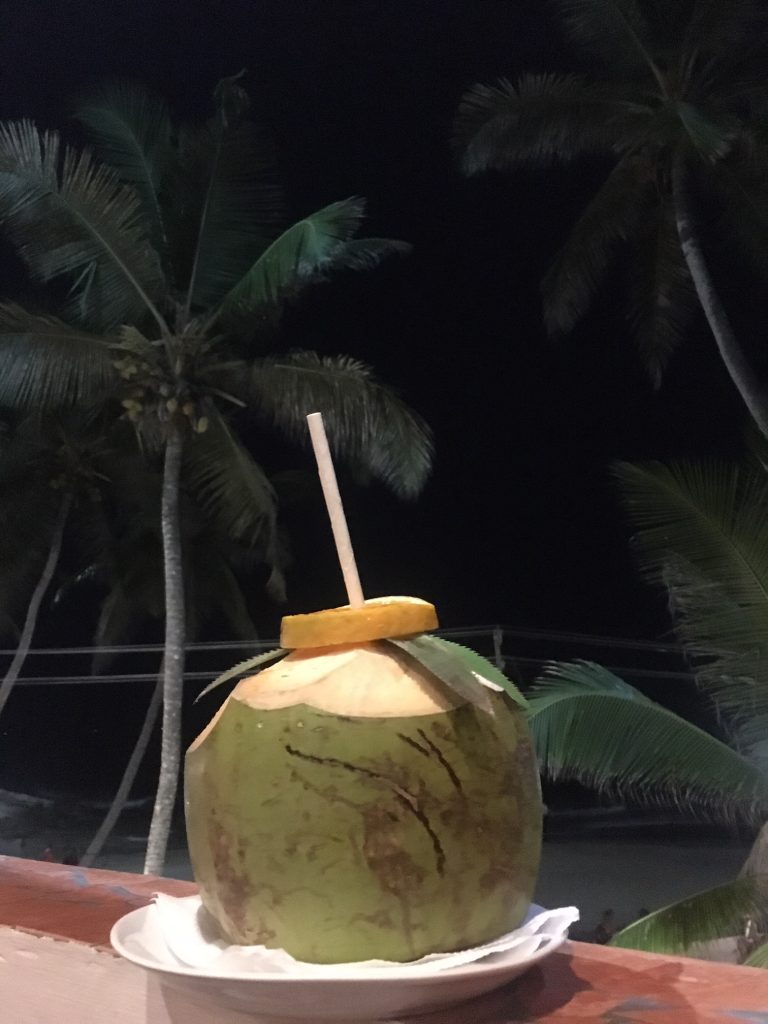 The sun went down quickly, hidden behind the fog of evaporating seawater and within 30 minutes it was pitch black. Out there on the see lots of lights appeared, as the fishers were starting to do their thing.

Time for some food, so we visited the Crab Club, and indeed the beer there was served in Tea Cups and the bottles stood under the table. Tasty tea!

Fish in Banana leaf, Shrimp masala and Tiger Prawn curry were a good way the fight the hunger, so we walked down the boulevard in a half coma.

As all shops were already closing up, we ended up at a tailor shop, looking for more suitable pants for this weather, and we did find some simple cotton pants for 600 Rupees.

We walked around the corner from Lighthouse beach to Kovalam Beach and then tried to go for a shortcut back to our hotel. Well, it still is a labyrinth, especially in the dark. But this way, we were able to see parts of Kovalam we had not seen before and probably will never see again.

So now it was definitely time and reason for another cold drink.

We had seen a sign saying music cafe before so after finding it again, we sat down and asked, whether they do have music and or if we could play there.

Turns out it is only the name, no music in Kovalam… 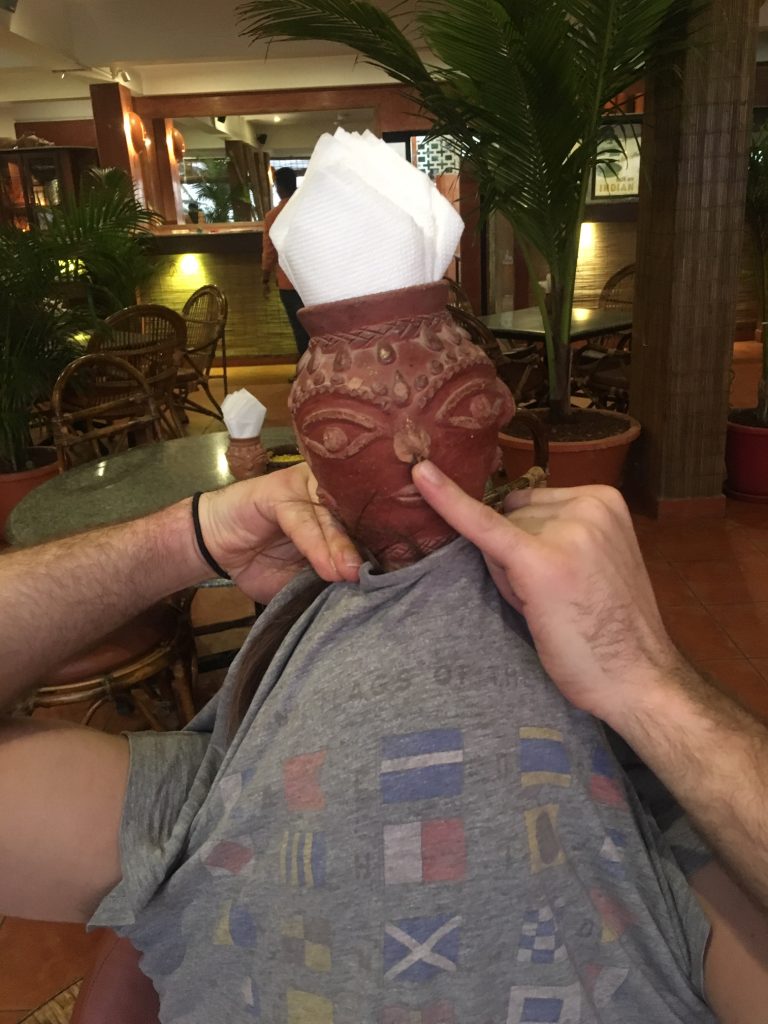 Heading back to the hotel, we stopped at fusion once more, and at 23h all things were coming to an end.