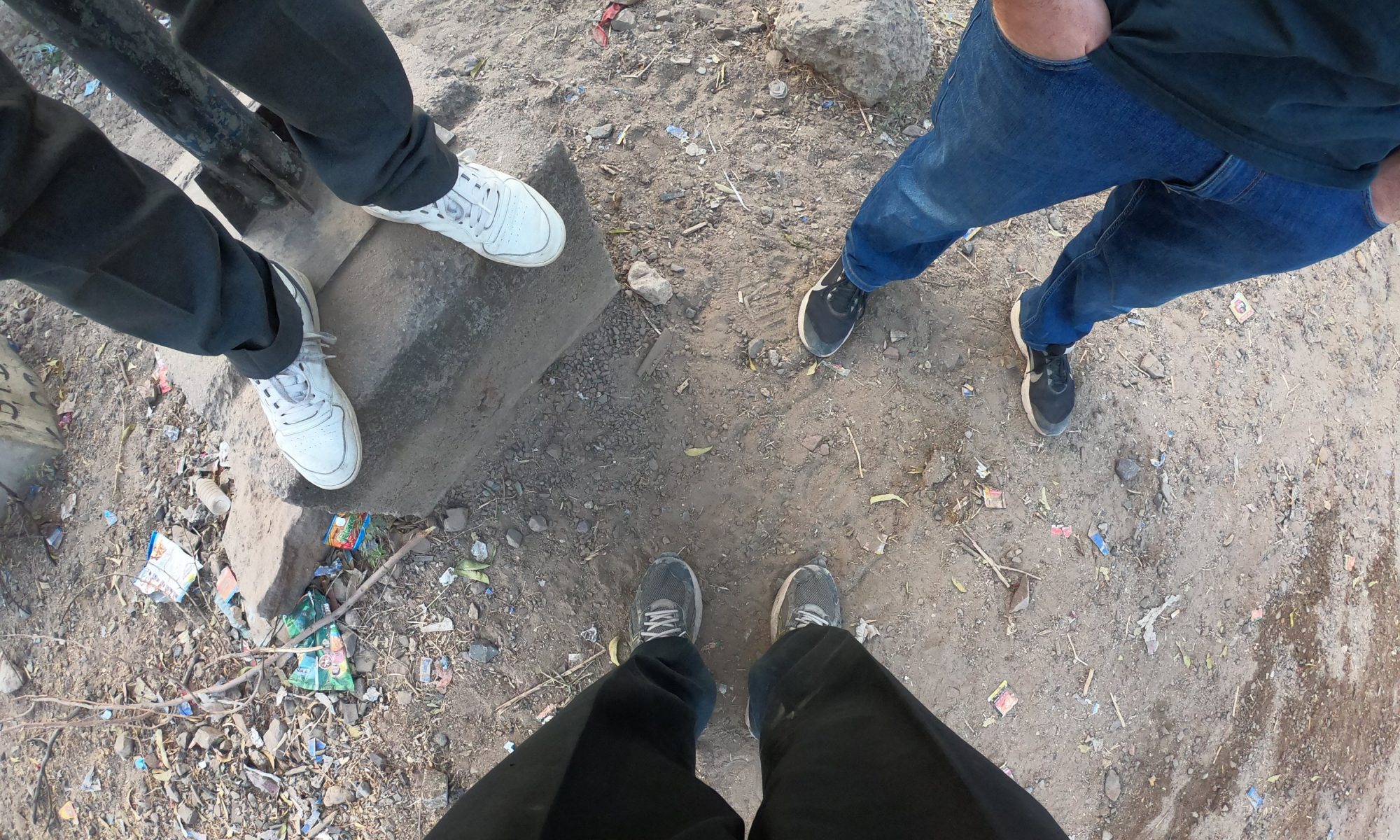 The day started with opening our social media office in front of room 59, the blog entries of the last 4 days had to be shared, while drinking some chai masala. 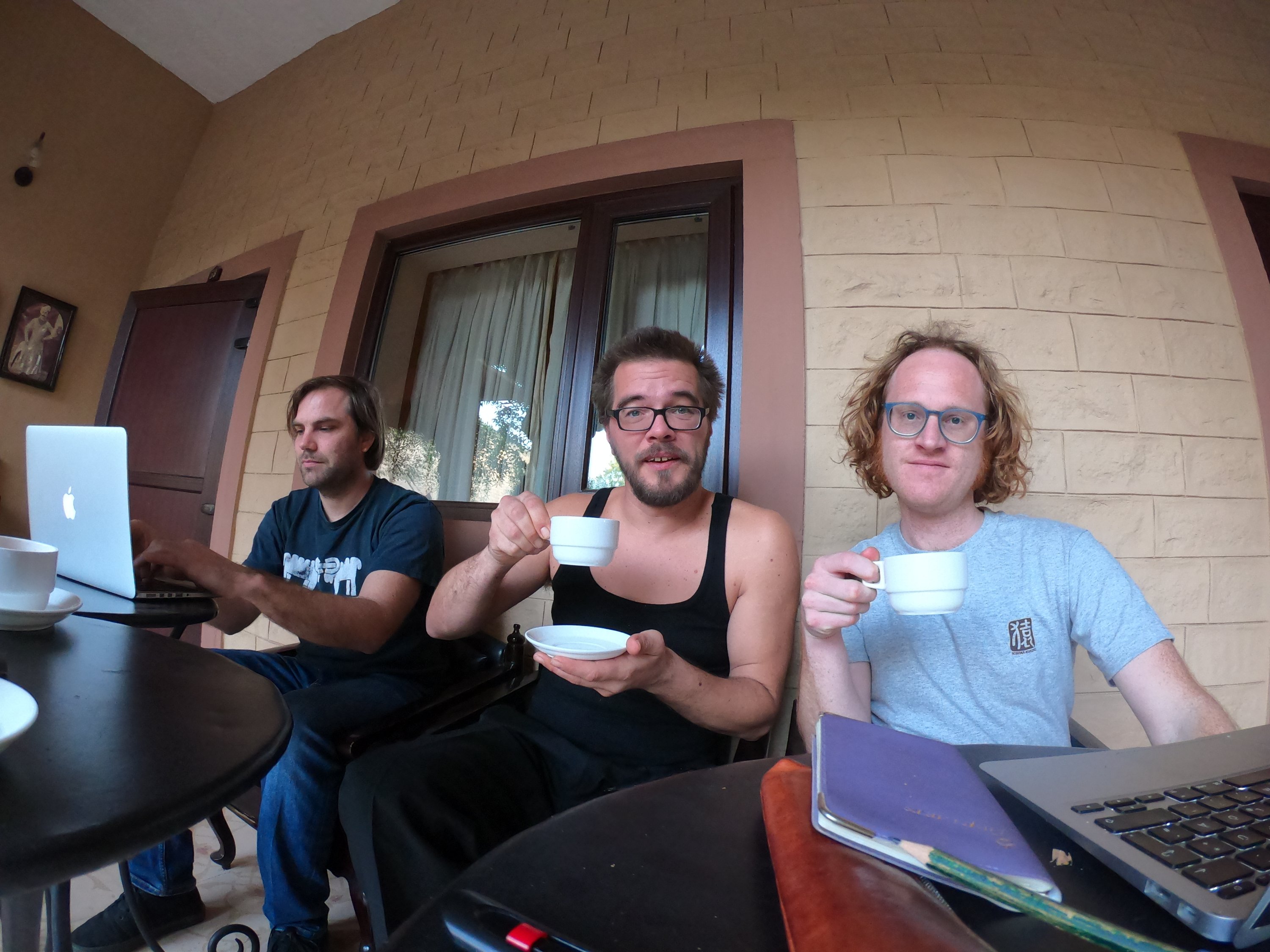 Today we decided to go for an extended walk to discover the salty river Luni. We walked through the village headed to the right direction and after a few deadends we found the riverbed. 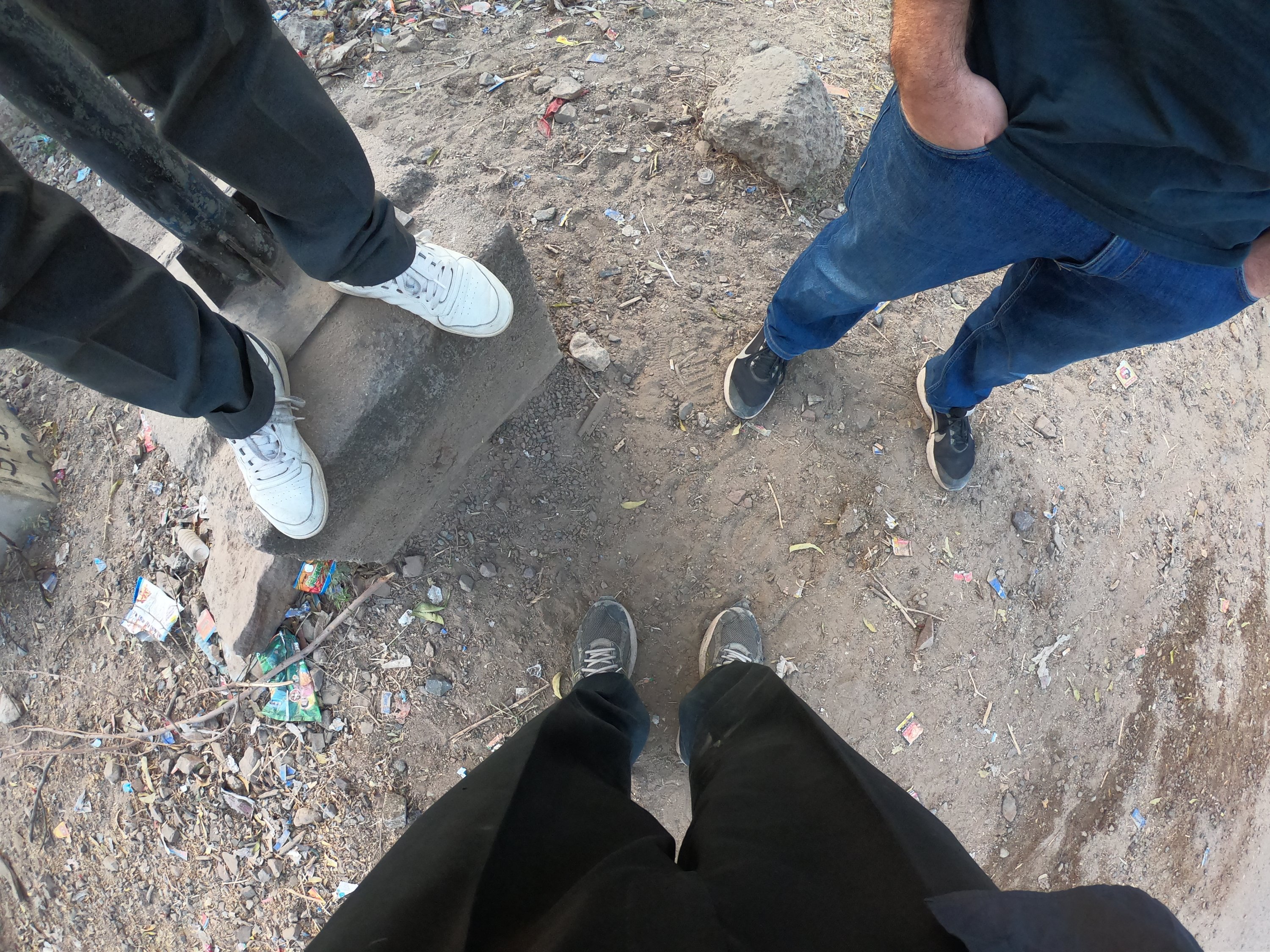 The residents greeted friendly, especially the kids repeated their hellos and bye byes a few times and even came up to shake our hand.

Some young boys were playing cricket in the fields an yelled in our direction to invite us to play. 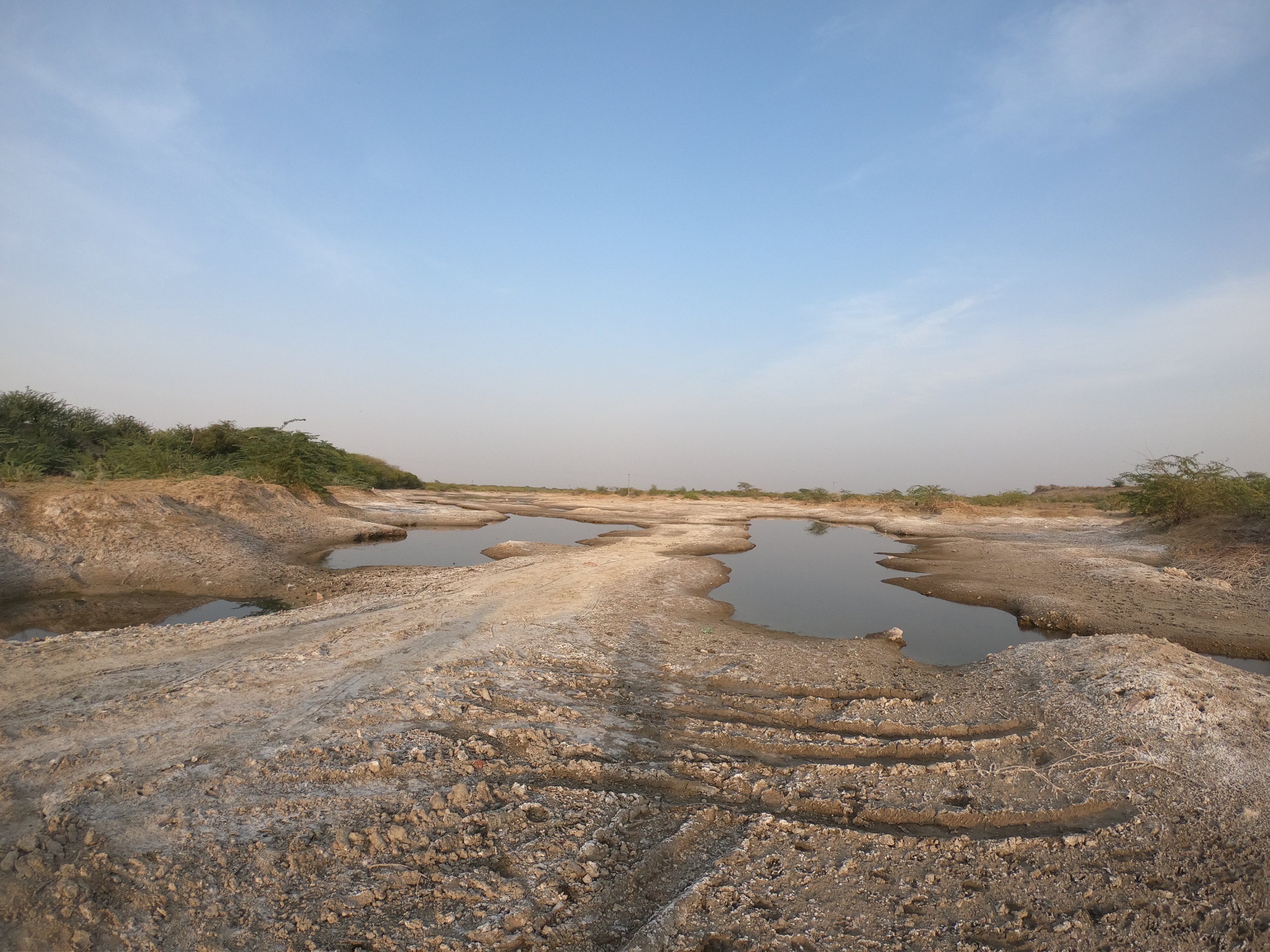 A bunch of puddles of water surrounded by a white saltcrust were left but no actual waterflow. The bushes were littered with trash of all kinds and some cow corpses were rotting away in the sun. The stomach of one cow was completely filled with plastic bags, but that did not stop a stray dog from chewing on the remaining flesh.

We crossed the riverbed right next to a railway bridge and a honking train passed over it. 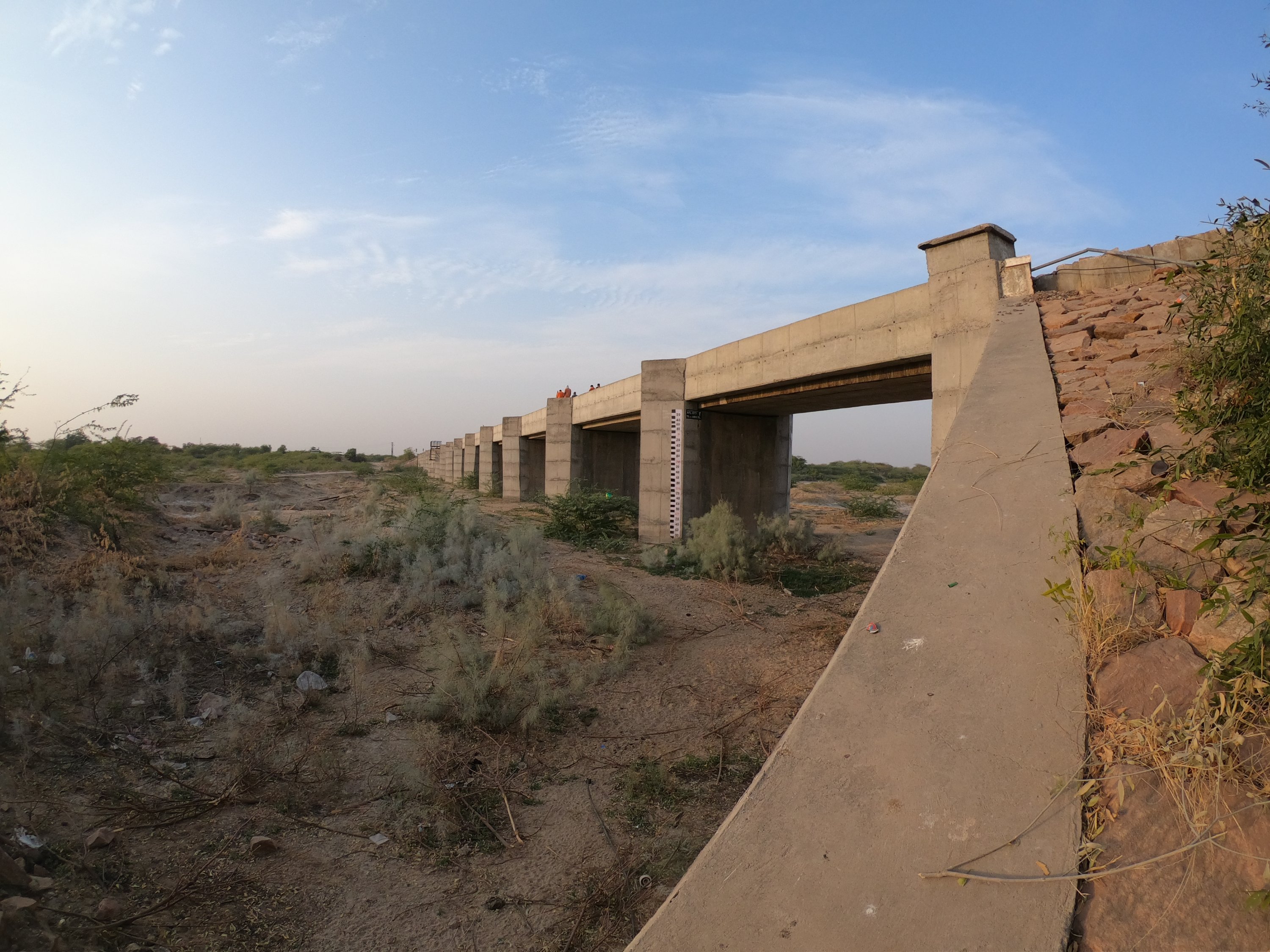 We got up on the rails and a crew of about 5 men came in our direction with a sort of draisine to measure the width of the tracks for safety reasons. 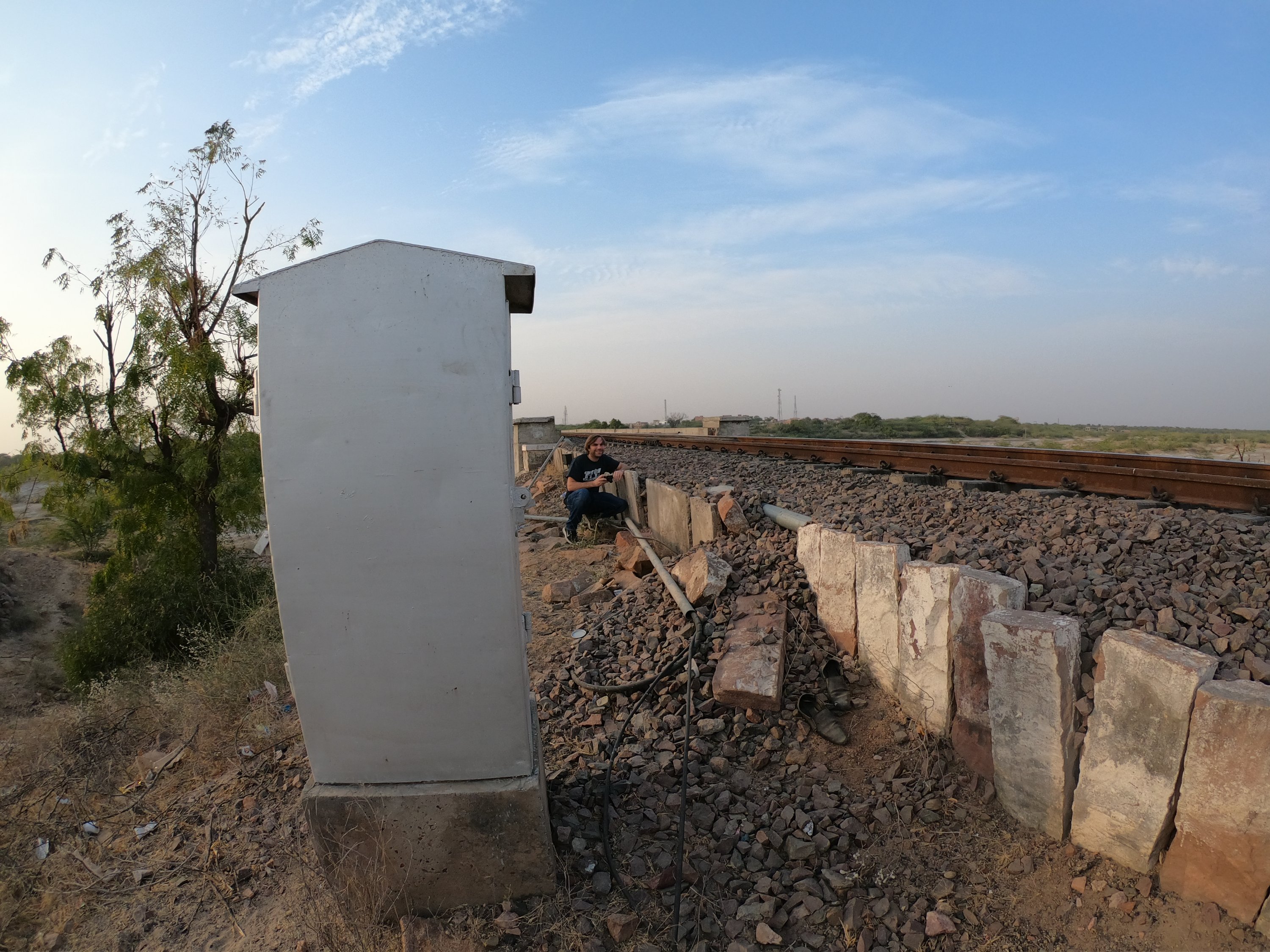 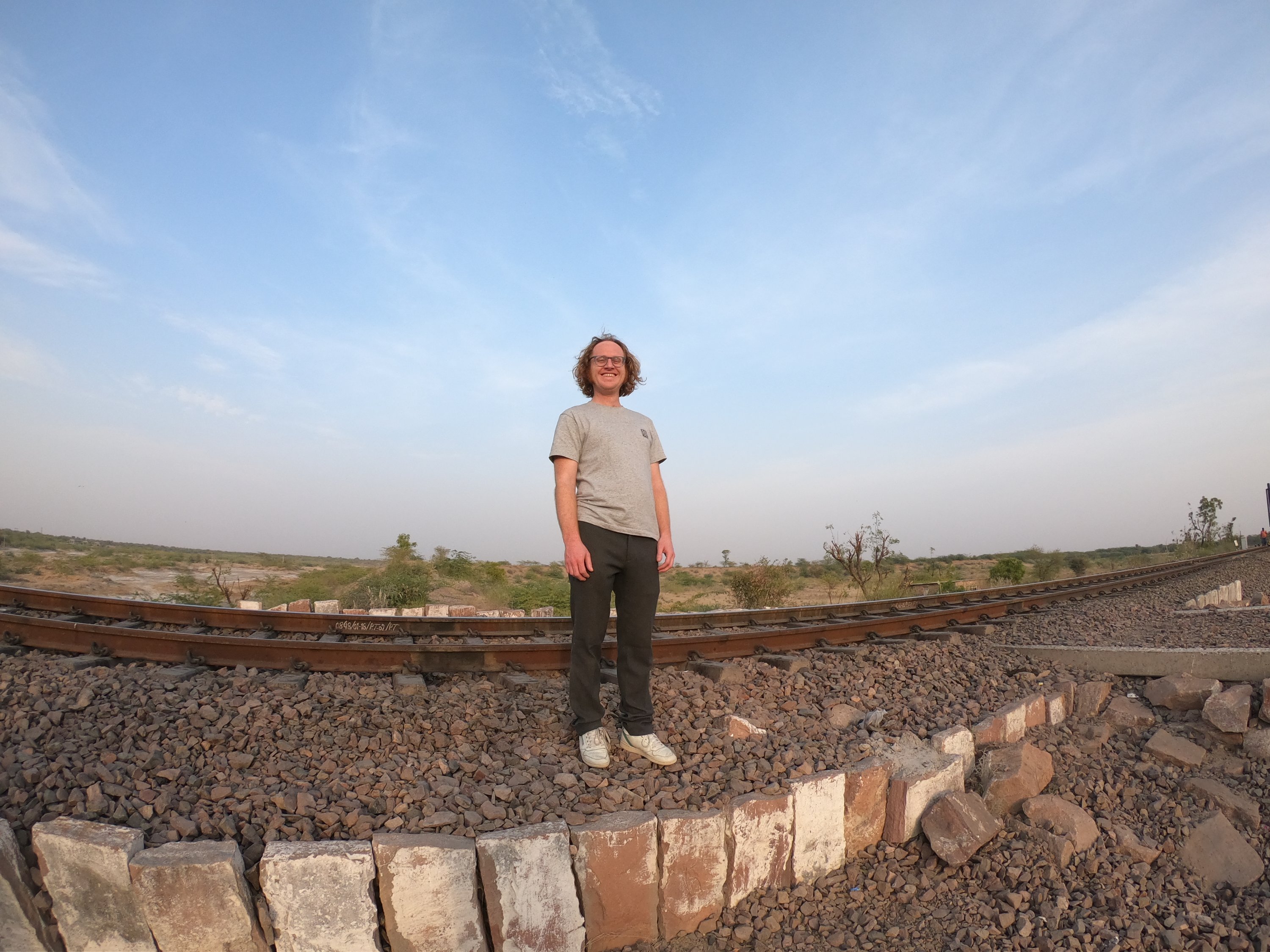 On the way back to the Fort we walked along the rails and a young man on a motorcycle stopped to find out where we were from. He told us he was shopping for dinner and had already bought oil and a kilo of garlic, but more importantly asked if we were on Facebook, he handed over his phone so we could find our profile and he could send a friend request. While we were doing that uncle 2 kept calling, he answered and told us that he had to go back to the shop to buy two kilos of chilis. He invited us to come to his house, but we had other plans. His name was Suresh. 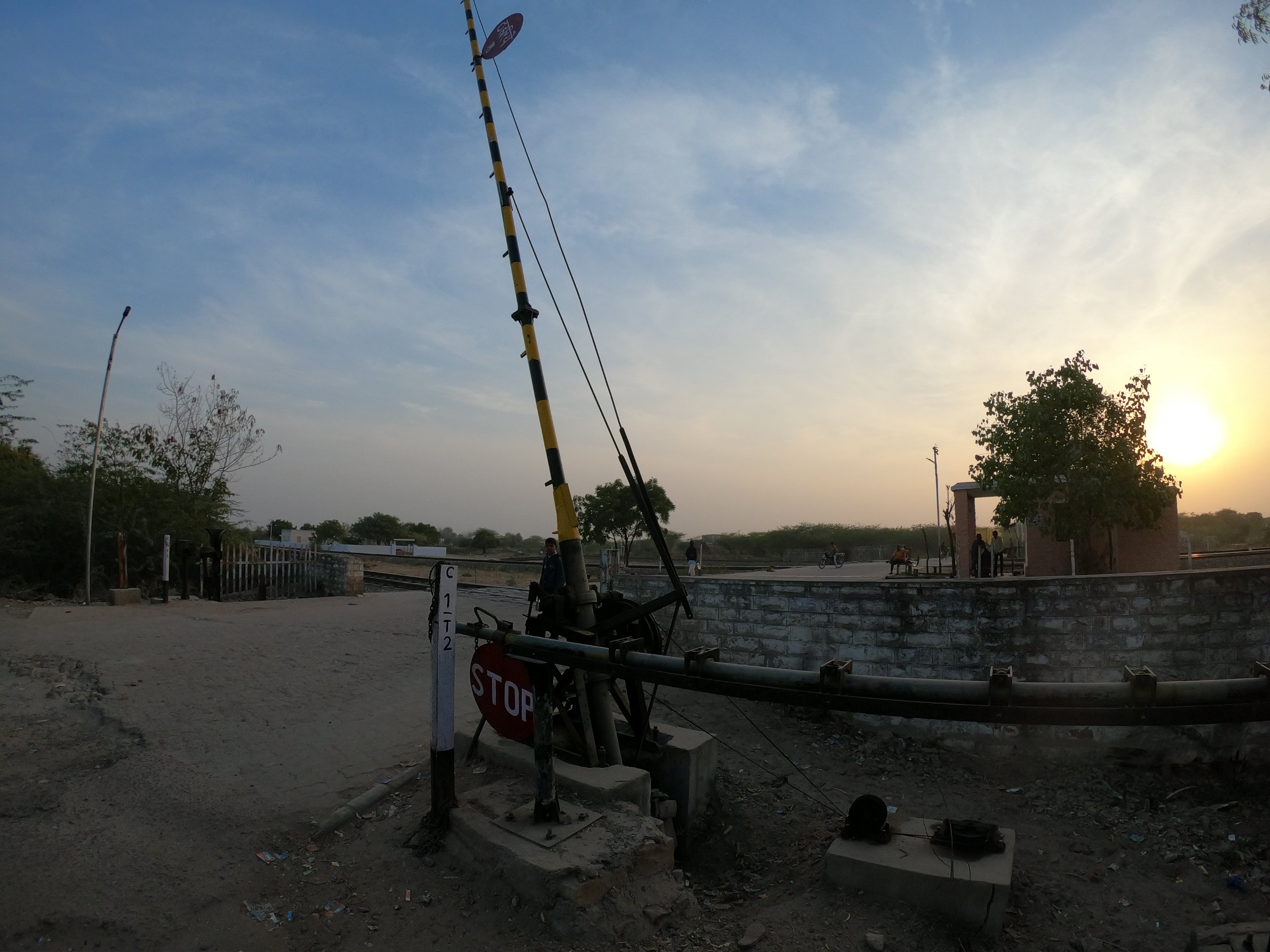 There was a railway crossing and cars and motorcycles were waiting for the gate to open, but some riders just limboed under it, so at some point the guard just opened it and everybody got on their way.

Just a few steps from our Fort another man greeted us and offered an Indian cigarette called Beedi. It turned out him and his friend were sugar bakers and they showed us photos of their food on their smartphones while two boys were looking at us with shy interest.

Upon returning to Fort Chanwa preparations for the final evening were well on their way: the big stage was set up again and all the different workshop groups were busy practicing their routines.

At about 20h the program started with Imran Khan and his 7 Sitar students accompanied by flute and tabla, followed by the Tabla players und the singers.

They all presented, what they had learned n the past week, some of them had never touched the instruments before or sang at all.

The singing Guru performed with the Tabla Guru and a Harmonium player, to show some more classical Indian music.

By then Suresh had sent two Photo updates via Facebook Messenger with the food he was preparing to invite us over, but we could not leave…

After that the stage was switched and it was time for the dance performances, a classical one and for the absolute finale: Bollywood Dance!

They made us all join in, so at the end it was a big Bollywood dance party. Who would have known that it is so much fun!

Time was flying, so Dinner started at 23:30h, we cheated a little bit and had a tomato soup earlier.

Chaitanya and Ajush, both participants of the Tabla group, who we had met on our first trip to Jodhpur market, sat down at our table and we got to learn more about the intricate language of the tabla. There is s special syllable for every stroke combination on the tabla, so it depends on your vocabulary how many combinations you can play. Fascinating stuff!

When we were about ready to go to bed we met the Prince again, and he invited us to have another drink with him and his son.

We talked about religion again, and he told us about the history of islam and hinduism in India and how complicated it is to convert Hindus, as they will just incorporate Allah or Jesus with the rest of their gods.

Because his son was into 70s rock music he told us a story about him in his early teens on the beach of Goa, when a VW Van pulled up, a bunch of guys came out and set up their instruments and played for the 25-35 hippie looking people on the beach for about two hours. Then they ended their spontaneous concert with the words he would not forget: Thank you very much , it was a pleasure playing for you, back in our country they call us Led Zeppelin …

We exchanged contacts and he invited us to stay at his home in Jodhpur next time we visit.