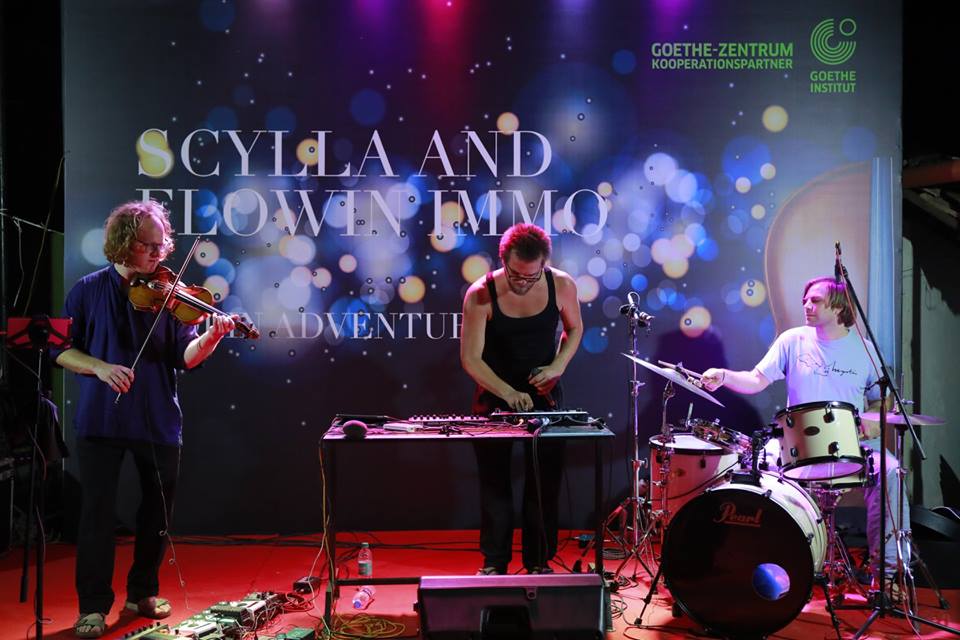 Scylla and Flowin IMMO in India – Day 12: Concert in Thiruvananthapuram

We played at the Goethe Zentrum Thiruvananthapuram and had a lot of fun! Here also a videolink to our "Zugabe" in Malayalam: https://youtu.be/xOetrnlRVeQ

One last dip in the Ocean, one last coconut for breakfast and we were on our way to the big city.

Charles got two porters to carry our suitcases up the hill. Tough dudes, who carry heavy loads on the head!

Sadiq dropped us of at the Windsor Hotel around 14:30h, for the first time on hour trip we had three single rooms on the 8th floor. Great view over Thiruvananthapuram, the capital of Kerala. 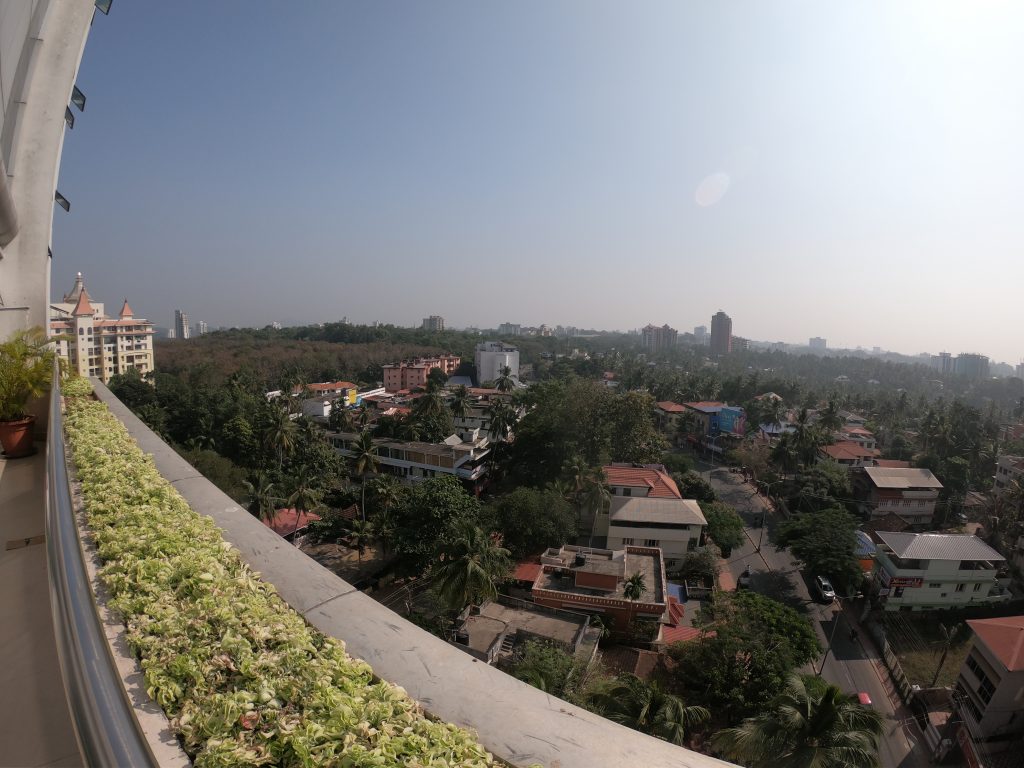 We jumped into the pool and were ready for pickup at 16h to go to the Goethe Zentrum for setup and soundcheck. 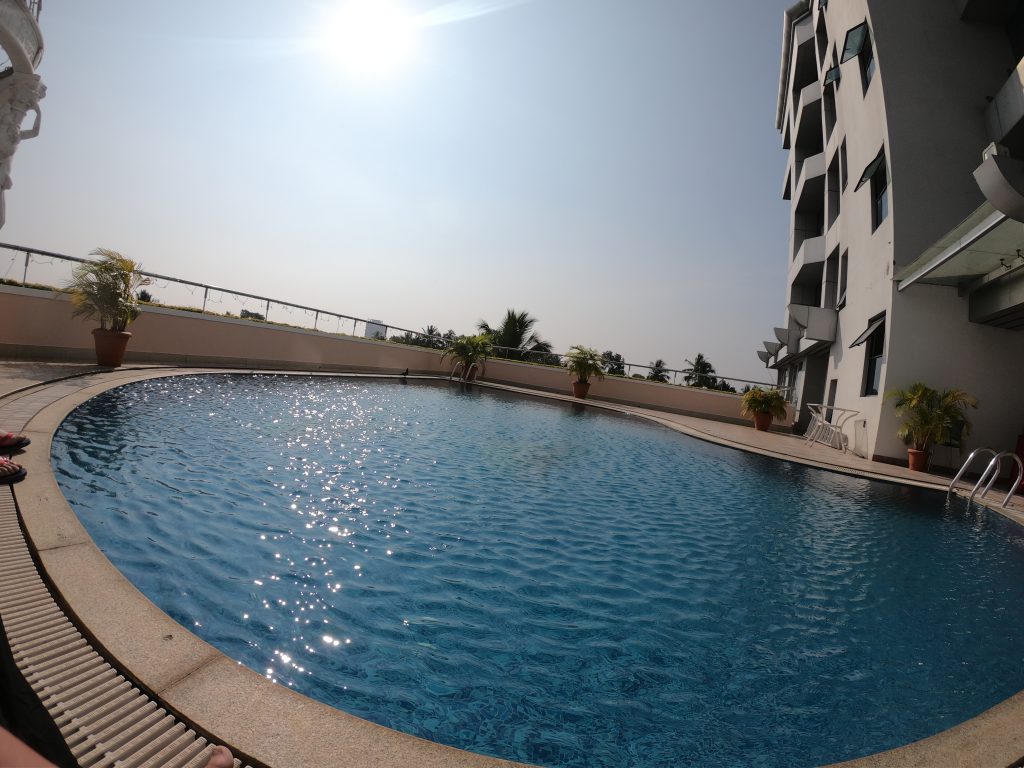 This is where we met Bobby, who Haase had been in touch with for the coordination of our concert. The Goethe Zentrum is a language school, but they also host cultural events in their garden, where a small amphitheater is set up. 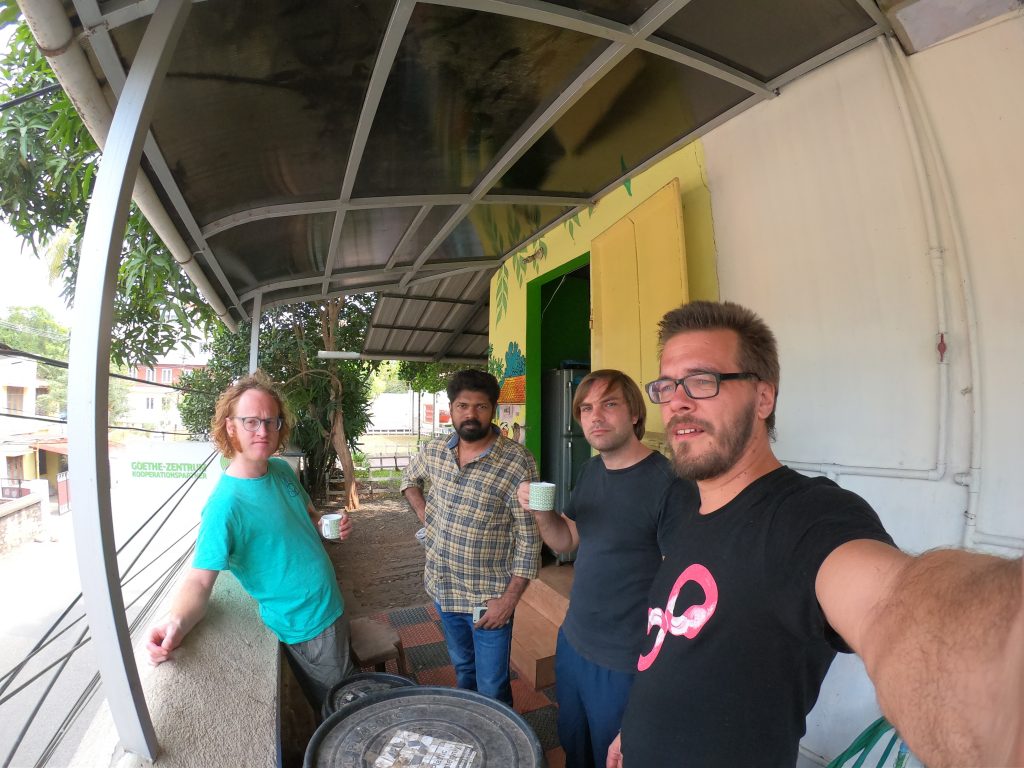 A huge backdrop with our names had been printed and the sound crew was almost ready for us. A group of young german students was there and eager to try their first real life small talk with Germans, and take some selfies, of course. 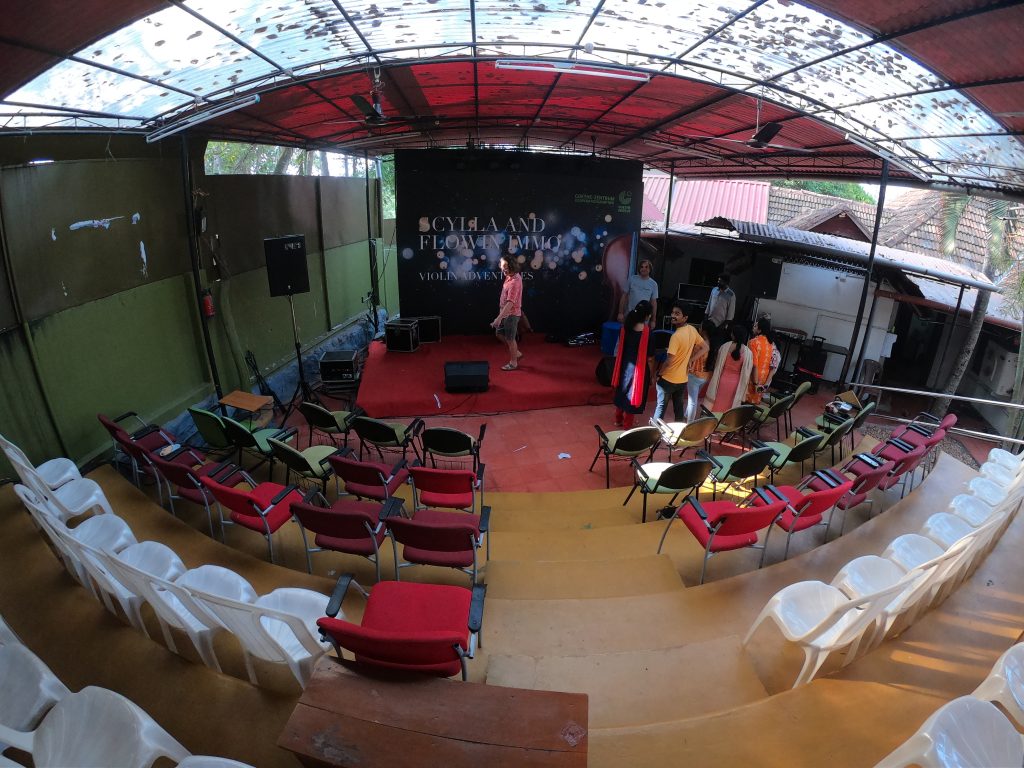 Djidin, the sound guy, was very cooperative and soundcheck was done quickly, we even setup our recording devices to record individual tracks of the music for later mixing. 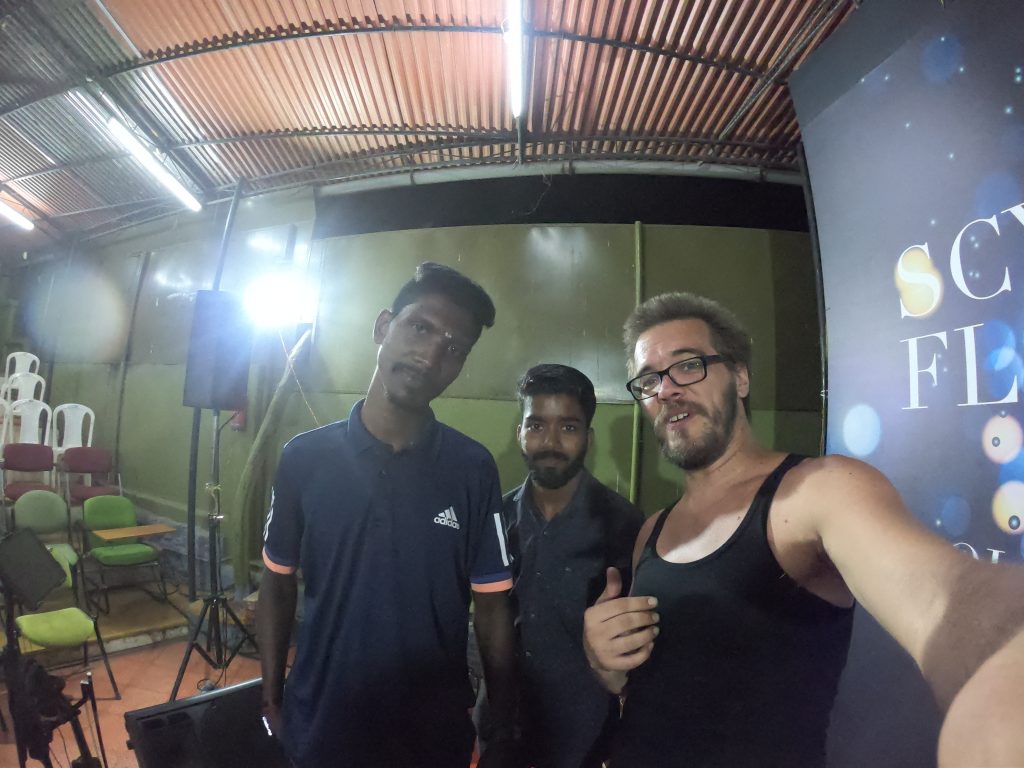 After soundcheck we went to the front of the house and met a few young men, who had been studying german for the past few months, as they are planning to come to Germany to continue their engineering studies. Their german was pretty good already, although they also had not had a normal conversation with a native german. Communication is fun! 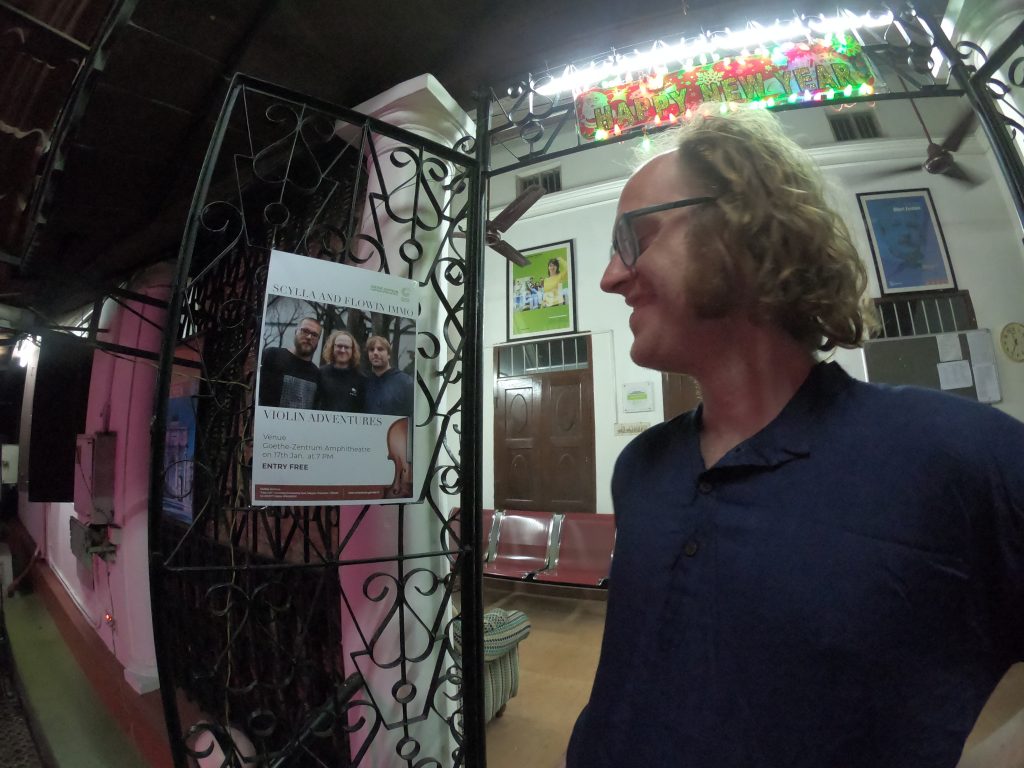 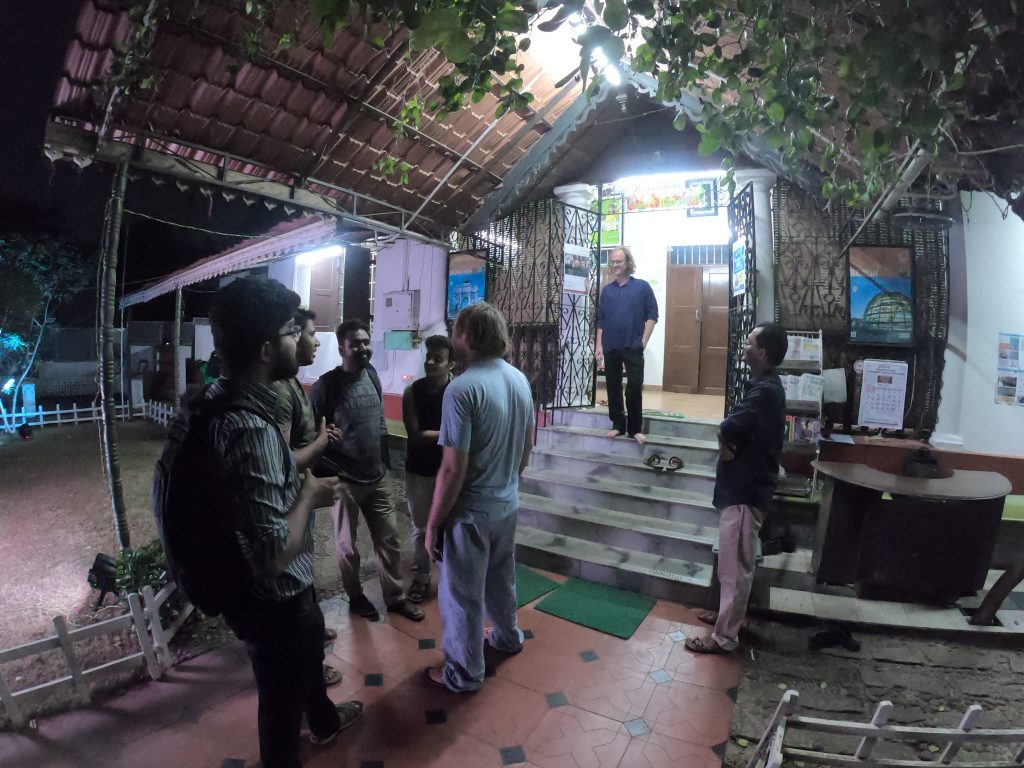 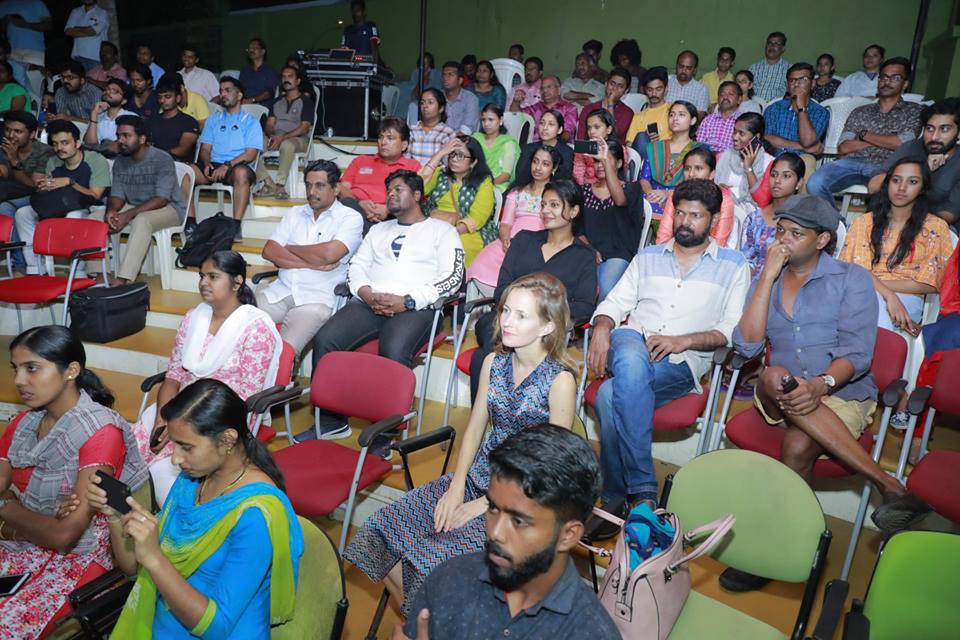 The theater filled up pretty quickly and we started playing on time, splitting our set into three parts: first Flowin Immo , then Scylla and finally the collaboration of both acts.

The Kerala crowd reacted well, and things got wild, when for the last number some words in their language called Malayalam were used instead of german words. They proposed Sundaren (beautiful man) and quickly Sundari (beautiful woman) was added. Sundaren Sundari !

After the show, we were presented with a gift basket of almonds, cashew, dates, raisins and some chocolate sweets, and we had to take one group selfie after another. 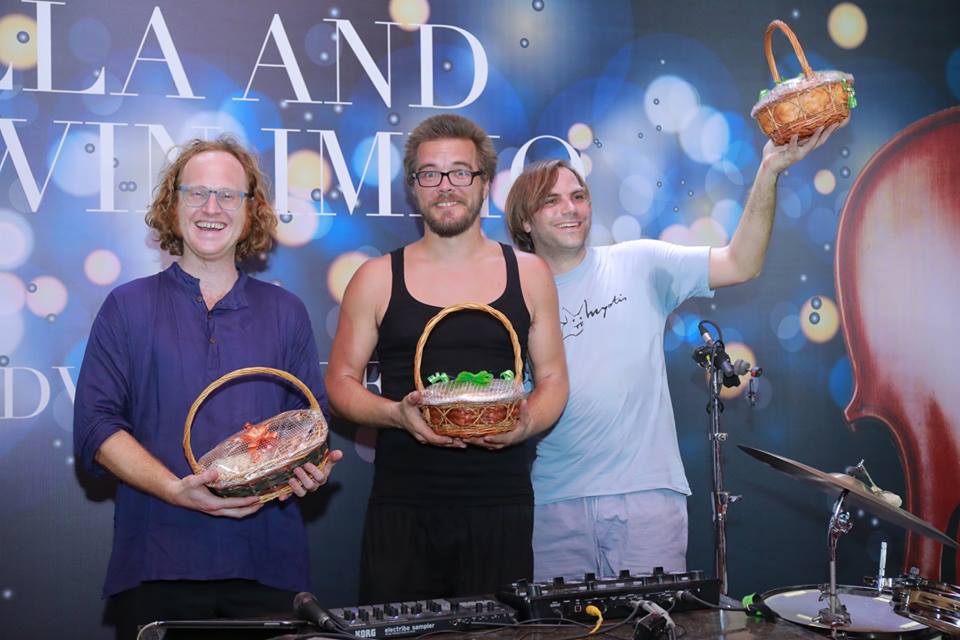 You can see a lot of photos from the show here:

We packed our instruments and were taken back to the Hotel, had dinner and went to bed after an exciting day in beautiful Kerala, the land of the coconut!